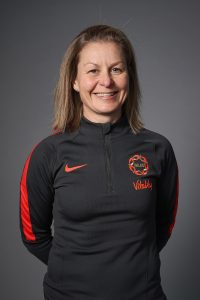 The PLx awards, which took place today, have been introduced by UK Sport to celebrate the impact staff within the high performance system have on British athletes.

The event, which was this year held at The Principal Manchester Hotel, saw former Vitality Roses Head Coach Tracey Neville win the ‘coach who has made a special impact on high performance sport’ award.

Tracey’s revolutionary achievement of leading the Vitality Roses to gold medal success for the first time in England’s history at the 2018 Commonwealth Games, meant her shortlist for the award came as no surprise.

Upon receiving her award, Tracey said: “The Commonwealth Games was a dream come true, it’s something we’d been working towards for a long time and to be able to claim gold in such a dramatic final against home favourites Australia was unforgettable. When I took on the position as Head Coach I knew we had to change the mentality of our players to ensure they could perform under pressure and against the world’s best teams. With the support of the performance team at England Netball and thanks to the drive of these outstanding athletes, we were able to do just that and reach new heights.

“Thank you to everyone on the judging panel for this award, I am honoured to be recognised for my involvement in the Vitality Roses’ journey.”

England Netball’s Performance Director Sara Symington also attended the event and was amongst the nominees for the ‘biggest turnaround in high performance sport’ for the role she played in implementing the full-time Roses programme, which sparked a huge transformation of the sporting landscape for netball in the UK.

Sara, who has held the position of Performance Director for four years at England Netball, commented: “It is a privilege to be nominated for the role I was able to play at England Netball and in helping the Vitality Roses secure gold at the 2018 Commonwealth Games. There were a lot of challenges in getting the full-time Roses programme to where it is today, we set ourselves ambitious targets but I am delighted to say we reached our goals and netball in this country has never been in a better position.

“We are now at the start of a new international cycle and I’m looking forward to seeing what the team on court can do with the support of those of us tirelessly working behind the scenes.”

Fran Connolly, CEO of England Netball, said: “Sara and Tracey were both vital in the implementation of the full-time Roses programme and the team’s journey to gold in 2018. That historic victory propelled netball into the limelight across the country and inspired thousands to start playing and engaging with the sport, thanks to them and the Vitality Roses we have been able to capitalise on their success across the whole organisation. Congratulations to Tracey for her award and Sara for her nomination.”

Fans can still get tickets via the England Netball website to watch the Vitality Roses, now led by Head Coach Jess Thirlby, as they face New Zealand, South Africa and Jamaica.