Simon Middleton wanted to test the depth of talent available to him, and his starting fifteen gave him a resounding response. Ten tries were scored as the Red Roses grew more and more dominant in the second-half rain. It hardly needed the strongest bench England may ever have offered to ensure an overwhelming victory. 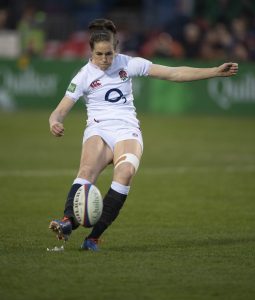 Mo Hunt came on to celebrate her 50th cap and was given a rousing welcome by a full house. Her first action was to knock the ball on; from thereafter she offered another example of her outstanding service to the cause.

Just as last year at Exeter, bad luck dogged Italy from the start. This time it was Isabella Locatelli who injured a shoulder in a tackle and had to leave the field.
England were already pressing close to the line. Italy managed to force one dangerous attack into touch, but an excellent catch and drive at the line-out saw Vicky Fleetwood enjoy an opening try on her return to a starting role at open-side. Emily Scarratt’s conversion hit the wrong side of the upright. (5-0)

In response Italy built a nice attack. England offended twice, giving Michela Sillari the option of an easier kick which she accepted. (5-3)

We weren’t to know at that early stage that her score was to represent the high-water mark of Italian achievement.

Scarratt produced another of her death-defying leaps to claim Hunt’s pin-point drop-out. The resulting penalty put the home side straight back on attack. A series of punishing drives were bravely halted until Cleall proved unstoppable. Scarratt converted.(12-3)

Zoe Harrison placed another penalty kick so close to the line that an accurate throw and catch led to an inevitable third try, for Heather Kerr. (17-3) 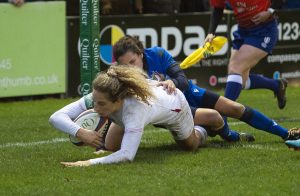 The next try was on a totally different level – outstanding combined play, off-loads, bewitching footwork – and Abby Dow still had to fight hard to make the line past stout defences. England’s best try of the series by a long chalk.

The great plus of the first half was to see the new-look English pack take command at scrum, breakdown and line-out. This was only the second start at No 3 for Shaunagh Brown and she was the face of today’s programme; she had a tremendous game in tight and loose. The second-row pairing of Zoe Aldcroft and Poppy Cleall gave an excellent impression of Tamara Taylor and Abbie Scott in all their glory. Both today’s flankers, Marlie Packer and Vicky Fleetwood, might best be described as open-side specialists, but they provided few signs of weakness or imbalance on the fringes. 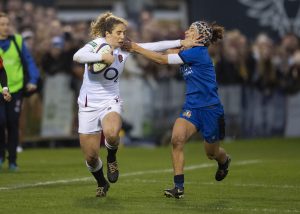 The sadness of the second half was to see the Italian performance dissolve into a series of penalties against, as they tried in vain to stem the English flood. The hope had been that they were a work in progress, improving match by match. They were missing one or two influential figures like their captain, Manuela Furlan, and Andrea Di Giandomenico experimented with Stefan at No 9 and Barattin at No 15. They could hardly be faulted, but their side had no answers to English pace, power and stamina as the rain poured down.

Hunt made a lovely break to get things going. Fleetwood’s footwork took the ball closer to the line. But the worsening conditions brought less accurate handling.

Aldcroft continued her fine showing at the line-out, Brown wrapped around the front, then Scarratt picked an unstoppable line to burst through under the posts. (29-3) There must be a way of stopping her, but it’s not all obvious.

At this point enter Sarah Bern, stage right. What must the Azzurre have thought as they realised oncoming English players would only increase the pace and pain? 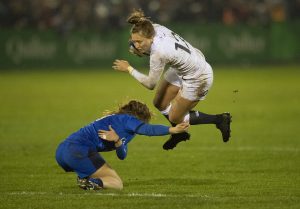 The first of two yellows was shown to Lucia Cammarano for pulling down. This led to a torrent of scoring. Harrison’s kicks to the corners remained accurate, and Kerr chalked up her second try by well-known means. (36-3)
On 62 minutes the rest of the bench was emptied. Now such luminaries as Katy Daley-Mclean, Amy Cokayne, Leanne Riley and Jess Breach came on to see if they could reach the same standards. They could.

In those eighteen minutes the Red Roses piled on a further 24 points. Bern claimed the first from another drive. No surprise that another yellow was brandished as the visitors failed to raise the drawbridge. Harrison potted another great conversion from close to the left edge.

As the England pack marched forward at a scrum, Beatrice Rigoni pounced on the ball short of the line. Result: penalty try and seven more points. (50-3)

Italy were pushed back even faster at the next one, and there was great rejoicing as Ro Marston got her debut try on her second appearance. (55-3)

To complete the debacle, Bern repeated her virtuoso front peel of last year’s game, only this time there were three or four fewer players in her path to be beaten.

Player of the Match: Vicky Fleetwood

Simon Middleton post-match was very pleased. The two French matches had been tough going. England had been lucky to get away with a win in Exeter. Here he wanted to see the side sticking to the plan all through, all singing from the same song-sheet. He was relieved they had pulled through those games, but in this finale he was delighted to see so many players making a claim for a place in the 6 Nations squad in the New Year.

You learn more from defeat than from victory. England won memorably in Rotorua in 2017, but New Zealand learned the lessons from it and won the World Cup. England have lost only once this calendar year, again to the Black Ferns, last July.

At least they had two very hard games against France to remind them how to salvage victory. Sadly the Bedford game was too one-sided to be totally satisfying.

Conditions were against easily produced open play, but still we saw only two of the tries scored by the backs. The final thumps by the forwards proved very little. Italy were a player down, and only their indomitable spirit kept them going in adversity.

But the new faces they brought in front of an English crowd will certainly benefit from this drubbing – in the long run.

With many thanks to Mark Pain for the use of his brilliant photos. http://www.sportsphotographyschool.co.uk/ http://www.markpain.com/