If you’re anxious for the action, scroll down to The Main Course

The Red Roses were desperately lucky to win the game. It had the crowd on the edge of their seats, except when they were on their feet waving their bonnets and hollering.

But first the Hors d’oeuvres.

A last-minute injury to Lark Davies saw Heather Kerr brought into the starting line-up and Rownita Marston of Bristol added to the bench. Detysha Harper again attended as a non-playing reserve.

If we thought French selections were inscrutable, then how about a No 8 replacing a No 2? Marston has been playing a prominent role in the Bears’ progress this season and deserves this recognition, but Vicky Fleetwood was seen as the obvious back-up at hooker – you can scarcely imagine better; she is after all a World Cup winner there – and Bristol isn’t a million miles from Exeter.

Safi N’Diaye celebrated her 70th cap in Clermont. Afterwards she looked back at the changes that had overtaken women’s rugby since her debut in 2012. Everything pointed in an upwards direction: the test match venues, the size of the crowds, the support from all corners of the land, the professional back-up the players receive, the training conditions, the financial incentives….

England players of a similar vintage have the same tale to tell.

As a parting shot Safi picked out the two games against the Black Ferns last year. They lost by two goals to nil in Toulon, then came back to gain a famous victory in Grenoble. So her message was ‘Exeter, here we come!’

By a delightful coincidence it was Marlie Packer’s turn to celebrate 70 caps back home in the West Country.

This was a titanic struggle that held its audience in thrall right up to the final whistle. Emily Scarratt started as she was to continue throughout the match. A huge leap to contest Katy Daley-Mclean’s kick-off, and the ball was in English hands. 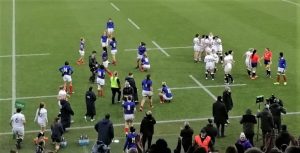 But lost possession saw the French counter-attack Morgane Peyronnet’s high kick was knocked on and the French threatened. The English held out by winning a ‘held-up’ decision at the final breakdown.

After eight minutes, Sarah Bern made her first charge, but when the ball was sent wide behind her, it was spilled. That was to remain the pattern for England for most of the match. Huge drives bravely stopped; adventurous passing movements ending in a handling error.

The French pack won two free-kicks at scrums; the second led to a dramatic passage of play. They drove up to the line, but there lost possession. As Rebecca Mahoney played advantage, the English spread the ball thrillingly down the line to Abby Dow, all behind the posts! This was reminiscent of the greatest Lions team of all – the 1971 version, when Barry John, John Dawes, David Duckham and Gerald Davies and Co would do the same. The only difference here was that Dow could reach no further than her 22. But it got the crowd roaring.

They were on their feet when they saw Scarratt scythe through the French line and drop over the line. But, just like her chum KD-M last year at Doncaster, she lost control. Caroline Boujard’s brave tackle came just in time.

The pendulum swung as Jessy Trémoulière potted a penalty. (0-3) Things worsened for the hosts as Laure Sansus hoisted an up-and-under, then got her foot to the ball as Sarah McKenna tried to retrieve it. She followed it in to score the opening try. (0-8) This was only the first of many actions that proved the French selectors right in offering her the No 9 shirt here. She was a constant menace to the English fringe defence with her agile running.

It took England over half-an-hour to post their first score. A French kick charged down led to yet another assault, but it brought only a penalty in front. Scarratt added the three points. (3-8)

Just before the break, another huge English attack gave Scarratt a second penalty from 24 metres out.

The game might have gone on like this, tight in the extreme, or it might have broken loose in a flood of passing movements. For much of those 40 minutes it looked like the first option, both sides going hammer and tongs, both finding the decisive phase hard to achieve.

Four minutes in, Scarratt struck her third penalty to put the Red Roses in front for the first time. (9-8). But the French pack was enjoying itself, slowly building a source of strength for the rest of the game. That allowed Sansus to operate even more dangerously. Her snipes around the edges and her variety of kicks threatened to slit the English defence open. But when they won a penalty Trémoulière pulled her attempt.

The first changes now took place: Mo Hunt for Leanne Riley and Pauline Bourdon for… no, not Sansus, but Peyronnet. The French were missing Drouin who had returned hotfoot to her Sevens sisters. This sequence of events spotlighted the differences in the French and English approaches to the game. Impossible to imagine any of Breach, Scarratt, Hunt, Emily Scott, etc, being invited across to the abbreviated game like this; but once more Bourdon was required to show her skills at No 10 not No 9.

On the three-quarter mark another overthrow at the line-out turned out well for the Roses. They developed a big attack that was thwarted illegally. The referee spoke to Gaëlle Hermet, and England’s No 13 struck her fourth kick of the day. (12-8) But still no try!

The last quarter saw a feature of the English game repeating itself far too often for comfort – weakness at the set scrum. In retrospect it showed how much they were missing Vickii Cornborough, Cath O’Donnell, Lark Davies and Amy Cokayne. But what are the chances that all the first choices will be available come the day of the hoped-for World Cup final?

The French hurled them back at two scrums. Behind one of them Sansus nipped round the blind-side, drew the last defender and Boujard was in, easy as you please. (12-15) Dow was badly hurt in the process and was helped off. Later Poppy Cleall became a second player to fail an HIA. When Zoe Aldcroft was found guilty of a high onslaught and shown yellow, the management may have felt they were so many boys with fingers in dykes, having to rearrange a pack already shorn of several starters.

Matters were alleviated somewhat when Romane Ménager paid the penalty for too many infringements. She was carded for off-side. So it was 14 v 14.

Time was running out. In the 79th minute a misaligned left-footed kick out of deep French defence failed to find touch. Hunt caught it and swung a brilliant pass into midfield. It was all or nothing. The ball chained via Scarratt out to Lydia Thompson. Who better to score a game-turning try than the player who twice notched unforgettably in the last WC final? She scorched away to the right-hand corner to register yet another breathtaking example of the winger’s art.

Did England deserve to win? It’s hard to say yes without giving a nod to the great performance of the French. Both sides were fallible, but the home team just managed to keep their errors within bounds.

Player of the Match: Marlie Packer

Simon Middleton admitted he was frustrated by the way the game turned out. Errors pinpointed in the Clermont game were repeated at Exeter. He felt his side was nervous in the early stages. His half-time chat centred on the eternal truths: keep the errors down. They were still in a good position to win the game, but guilty of forcing the issue too often.

(Annoyingly, this continued after the turn-round. There were no successful driving mauls this time, and the backs produced their only decisive move when the referee was ready to call a halt.)

He admitted all the absences did have the effect of making the side look like a patchwork. But it gave players valuable experience in having to perform outside their comfort zone.

He was delighted by the size of the crowd and its response to the unfolding drama.

But they won. And France suffered a fourth successive defeat. They well know how close they came, they scored two tries to one, but that doesn’t improve the savour of unwelcome defeat.

Gate prices at Clermont went up to 40 Euros.

The SRU has announced the award of ten contracts for 2019-20. The recipients are:

This represents an increase of two over last year, the newcomers asterisked.

The SRU explains: ‘The contracts come in varying forms and support players either through direct monetary support or through a partnership agreement with their place of work that allows them the time they need to train and compete.’