There has been talk about clubs of different nations meeting up in competition for quite a while, but it’s taking time to lift off decisively. 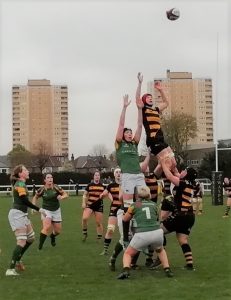 When Saracens met Stade Rennais in May 2018 in Dunkirk it looked like the start of something big – note that both sides played away from home – but since then the only follow-up was a match between Wasps and Railway Union of Dublin this year, the very first link between clubs from the Tyrrells and the AIL.

So far as I can tell only Spanish and Portuguese clubs have competed together with any regularity, though it’s quite possible that neighbouring nations like Belgium and the Netherlands may have taken a lead.

Now comes news of a major step forward Leinster travel to Twickenham Stadium to take on Quins on 28 December in a double-header with Harlequins men playing Leicester Tigers.

This meeting registers any number of firsts. Quins women have never before played at HQ. This is the first double-header club match played at HQ. No women’s club match has ever been played there before. No Irish province has played a game against English opposition away. Both organizations are giving the event the full treatment.

After this breakthrough we wonder how the trend may continue. There were hopes of setting up an Anglo-French club competition. The difficulties barely need expounding. How to find space in the calendar, how to finance such a major operation, whether to go for a knock-out competition or a full-blown league. None of these matters offers a simple answer.

Travel is easy these days, funding is not.

Sadly, the balance of power limits the choices. Only English and French clubs have the strength to face each other regularly, though the Celtic lands might fancy introducing an equivalent of the Pro-14. It’s significant that it is Leinster who provide the opposition for this Christmas fixture. They are traditionally the strongest of the Irish provinces. When Railway Union came to play Wasps, both clubs were about to play in the semi-final of their respective competitions. Wasps saw their visitors off 33-13. Railway went on to win their competition; Wasps didn’t make their final.

At least we can hope for more of these contests as one-offs. Test matches are the icing on the cake, but tie-ups at club level would offer huge attractions to many more players who deserve the opportunity.