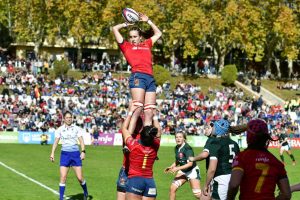 On 3 November Wales began a hectic programme of five autumn matches on consecutive weekends with a game against Spain in Madrid.

Spain made another statement of intent as they beat an experimental Welsh XV 29-5. The visitors gave first starts to six players, forwards Gwenllian Jenkins, Georgia Evans and Abbie Fleming, and backs Angharad de Smet, Caitlin Lewis and Megan Webb. Two more, Robyn Lock and Niamh Terry, were on the bench alongside familiar names like Siwan Lillicrap and Elinor Snowsill. 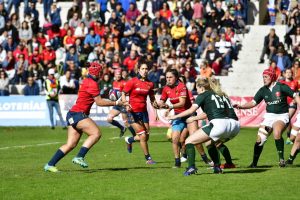 Still, it was a disappointing start to their autumn programme, as their only score came through a fine outside break and try by Alecs Donovan at the end of the game. Would they have been wiser to pick a more experienced side to get the show on the road?

The Spanish confirmed their authority by taking a 12-0 lead into half-time, tries by Olivia Fresneda and Beatriz Dominguez. Later they produced an excellent drive off a line-out outside the Welsh 22 and went all the way to the line. Anne Fernandez, playing No 10 rather than No 9 here, made a lovely break to arc through a misaligned back line.

The narrow Welsh defence that England exploited two years ago was again in evidence. A simple cut-out pass to the right wing Maria Garcia left the defence one short. Let’s hope Donovan’s late riposte was enough to reassure the coaches, Gareth Wyatt, Chris Horsman and Geraint Lewis, of their squad’s well-being.

The WRU has announced that Rowland Phillips is taking a short period away from his autumn duties. There are four matches still to come, against Ireland, Scotland, the Barbarians (a double-header) and Crawshays. Meantime Phillips’ daughter Carys was earning her fiftieth cap in her seventh season in national colours.

This was Spain’s fifth win against Wales in thirteen encounters.

Loughborough’s Briggs to take up coaching role in Tasmania.

International teams to return to Lee Valley in 2021.