HRH The Duchess of Cornwall, President of Ebony Horse Club was among a number of high-profile guests who attended the premiere of the documentary film, Riding a Dream. 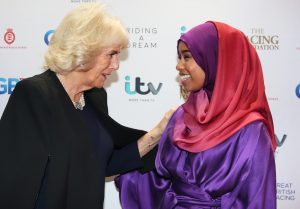 The premiere took place at The Ritzy Picturehouse in London’s Brixton earlier this evening (Monday 28 October) and which tells the inspirational story of Khadijah Mellah, the first British Muslim woman to ride in a horserace in the UK.

The premiere was held ahead of the documentary’s first broadcast, which will be at 12.15pm this Saturday, 2 November.

Riding a Dream, produced by brothers Oli and Philip Bell and directed by Mattia Reiniger and Tommy Bolwell, follows the remarkable story of Khadijah Mellah, 18, from Peckham, South London, who made history and global headlines this summer by becoming the first British Muslim woman to win a horserace – an achievement that came at one of British horseracing’s most prestigious festivals, Glorious Goodwood, barely four months after she had sat on a racehorse for the first time.

Charting her journey from the charity Ebony Horse Club in Brixton where she first learnt to ride, to one of the highlights of the global sporting calendar, the documentary follows Khadijah as she prepares to compete in the Magnolia Cup, an all-female charity race against the likes of Olympian Victoria Pendleton, model Vogue Williams, and professional event rider Sophie van der Merwe.

With just four months to prepare for the race of her life, Khadijah had to juggle studying for her A-Levels and fasting for Ramadan with a gruelling training and assessment regime in order to just make it to the start line. However, all her determination, discipline and passion paid off when, against all the odds, she won the race, resulting in one of the biggest sporting success stories of 2019 and securing her a spot in British sporting history. Following her win, Khadijah received a note of congratulations from The Duchess of Cornwall, who is President of Ebony Horse Club, and who she had met only a few weeks prior to the race during a reception for the Club, hosted by Her Royal Highness at Clarence House. 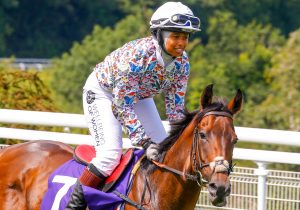 It can also be officially revealed for the first time that Khadijah sensationally failed her initial race riding test ahead of her jockey debut, with the film team left on tenterhooks as to whether she would be able to take her starting place in the Magnolia Cup charity race. Thankfully, confidence was restored when Khadijah passed her second test a couple of weeks before the race, classing her as race-ready.

Khadijah, who is now studying Mechanical Engineering at Brighton University following her A-Levels this summer, said: “Learning to ride, being given the opportunity to ride in a race, winning the race – and having a documentary made about all of it has just been the most incredible experience from start to finish. If I can inspire just one other person to follow their dreams, even if the odds are stacked against them, that would be amazing.”

Oli Bell, producer of Riding a Dream and an ITV Racing presenter, said: “I hope that people watching Riding a Dream will see what Khadijah’s achieved and feel inspired. It’s a wonderful story because you see someone who never would have expected to ride in a race, let alone win a race and you can see her blossom. Hopefully it will show that whoever you are, whatever your background, you can achieve your dreams. There is no doubt that what Khadijah achieved was a significant moment, not just in racing but in the wider sporting world. I hope it will encourage more people to get involved in the sport and for racing itself to broaden its appeal.”

Riding a Dream will be shown on ITV at 12.15pm this Saturday (2nd November). For more information please visit www.greatbritishracing.com/ridingadream