Wasps Ladies welcomed Loughborough Lightning to Twyford Avenue for their second live streamed game in two weeks. After a successful and triumphant win versus Bristol away in round 4 Wasps were looking to continue the good form at home. 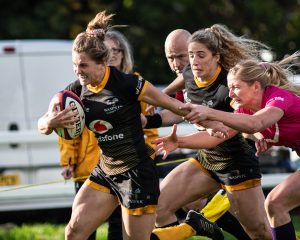 Wasps Ladies were without their Irish contingent Edel McMahon and Cliodhna Moloney who had a training camp, Nora Baltruweit was injured during the training week and experienced pair Dalena Dennison and Harriet Millar Mills were both unavailable due to injury. Even so Wasps managed to name a strong line up to face Lightning.

The start of the game saw Katy Daley-Mclean kicking deep into Wasps territory and number of scrums on Wasps 5m. This lead to the opening try of the game with Sarah Hunter going over from 8, conversion was missed. Five minutes on and Lightning had used the boot well to have possession in Wasps 22, and this time Olivia Jones goes over in the corner after 13 mins, 10-0 to Lightning. Wasps bounced back immediately with a brilliant box kick by Claudia Macdonald to put Lightning under pressure in their own line out. An overthrow from the lineout picked up by Macdonald allowed her to slice through the defensive line and score in the corner, conversion missed.

Wasps back three worked well together with Katie Mason and Abby Dow posing a threat from kick receipts. A strong Loughborough pack burrowed deep into the Wasps half and Amelia Harper scored from close range, conversion missed. A penalty kick from Emily Scarratt put the score to 18-5, Wasps replied with a penalty of their own and took the score to 18-8 at half time to Lightning.

Changes early in the second half brought on Claire Cripps, Lizzie Goulden, Makeda Lewis. Wasps scrummaged well and in the Lightning 22 leading to a try from Hannah West. Emily Scarratt continued to use her boot and another penalty extended Lightning’s lead to 21-15 after 49 mins. Tova Derk made impressive metres from her wing only to be put into touch in the corner. Kendall Templeman made a defensive impact with big tackles putting Lightning into touch around the halfway line. More possession came from the boot of Mclean and Harper pounced over the line. Harper collected an offload in the 22 and she goes over for her third of the game, converted by Scarratt, putting the score to 35-15 to Lightning in 73 mins.

A wet day at Twyford ended 35-15 to Loughborough. Wasps will look to bounce back next week away at Waterloo.