Great Britain’s deaf tennis players are assured of unprecedented success at the 2nd World Deaf Tennis Championships, with a squad of four players selected by the LTA set to play for six medals, including at least two silver medals, over the course of the next two days in Antalya, Turkey. 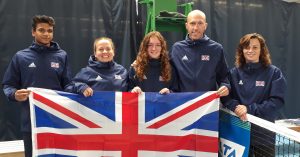 Fletcher said: “It’s a nice feeling being in the finals and after last year’s Dresse Cup result it shows GB are one of the main contenders. I’m delighted to be sharing these two finals with Esah and Phoebe, but also for making a wise decision on playing doubles only here. It has paid off, but I am keen to go one step further and take the titles in both events. We would be the first GB players to do so. We have very much adopted the British doubles system and trusted this, even when things are not going our way. We will see what the finals bring!”
Seventeen-year-old Hayat, who will also contest Friday’s boys’ singles semi-finals, said: “I’m really pleased to have made the men’s doubles final. We came through some very tough matches and I’m hoping to go one better than last year in the Dresse Cup and get my first men’s senior gold medal. I’m also very excited to go out there again tomorrow in the junior singles and doubles events.”

Four years ago Hayat became the first ever World Champion in boys’ singles, when the inaugural World Deaf Tennis Championships for individuals was staged on British soil, in Nottingham. Hayat plays Russian Vladislav Abramov on Friday for a place in this year’s final.

Suthers won the bronze medal in the girls’ singles in 2015 and the reigning women’s singles national champion plays Japan’s Riko Suzuki in Friday’s semi-finals in a bid to reach the gold medal match.

Fourth seeds Copenhagen and Suthers will play French top seeds Marine Beney and Lucie Boulestreau for the women’s doubles bronze medal after both partnerships were beaten by Japanese team in their respective semi-finals.

Courtesy of the LTA via MELT