Nicole Heavirland ran in two tries as USA defeated Australia 26-7 in the Cup final in Glendale to triumph on home soil for the first time on the HSBC World Rugby Women’s Sevens Series. 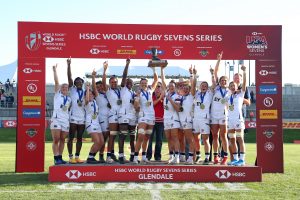 Alev Kelter’s early try was quickly responded to by Ellia Green, cutting back inside from the left. Ilona Maher, named HSBC Player of the Final, gave USA back their lead before the break, before Heavirland’s double ensured the Cup would stay in the States.

The USA, who had been defeated by France on day one, become the third team, after Australia and New Zealand, to win consecutive titles on the series, having won in Biarritz in the final event of the 2019 series. They were defeated by New Zealand in the Glendale final last year but made amends here.

“It feels incredible,” said captain Abby Gustaitis. “The home crowd, thanks to them. Numbers one to 12, all the girls back home, we wouldn’t have won without them. A shout out to all the staff as well for pushing us and believing in us. It’s been a huge 12 months for our programme, a few staff changes and bringing in girls. We continued to build on that performance from Glendale and we don’t want to be in that situation again.”Maher added: “It’s been an amazing time. This whole tournament has been great for us. Last season we got second then kept progressing throughout the season and now I think we’ve worked so hard and it’s so well deserved. We never gave up on ourselves, even when we lost to France, we just kept going.”VIEW #USAW7S FIXTURES AND RESULTS >>New Zealand ended up with the bronze medal, beating France 31-14. They fell behind through Anne-Cécile Ciofani and Carla Neisen’s tries, but they hit back with two tries before the break and three more after it, Gayle Broughton pulling the strings with an outstanding dummy for their third try and a beautiful inside ball for the fourth.The HSBC USA Women’s Sevens tournament in Glendale was first introduced in 2018 and is now one of eight tournaments on the women’s series – a record number for the women’s competition – with six of those combined with men’s events.

2020 SEASON CALENDAR >>
Hosted at Infinity Park in Glendale, Colorado, the HSBC USA Women’s Sevens also marked the start of the Olympic season with rugby sevens set to make its second appearance on the Olympic Games programme at Tokyo 2020.

After winning the world series qualifier earlier this year, Brazil earned core status for the 2020 season and were welcomed onto the world stage in Glendale alongside invitational side Japan.

Brazil’s Bianca Silva and New Zealand’s Stacey Waaka, who both played prominent roles this weekend, feature as ‘Unstoppables’ in World Rugby’s Women in Rugby ‘Try and Stop Us’ campaign which launched in May this year.

Try and Stop Us is aimed at driving increased participation and engagement among fans, audiences, players and investors in the women’s game.

The next tournament on the HSBC World Rugby Sevens Series is Dubai on 5-7 December, 2019 which is a combined men’s and women’s event.