Wasps iron out some early nerves to cement their first victory on home turf.  On a gorgeous day for rugby at Twyford Avenue the hosts pulled away in the second half, to finish the game 47-10 ahead. 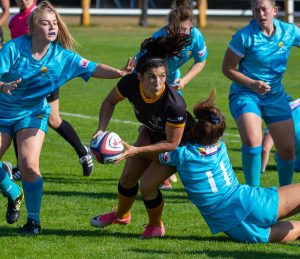 Worcester put pressure on Wasps from the kick off and an early penalty took the visitors to a 3-0 lead. The pressure from Worcester continued, however some strong defensive work from Wasps including two turnovers from Claire Molloy kept the visitors out.

Phases began to build; setting a rhythm that gathered pace for Wasps. Dominant set piece work in the scrum set a precedent and capitalising on this, a lineout on Worcester’s 5m was driven over for the first try of the game by Hannah West. Lizzie Goulden took the kick and the score to a 7-3 lead for the hosts.

The teams continued to trade attacking blows with some excellent defensive work, notably from Wasps’ Gemma Rowland as Worcester’s winger cut back into her channel.  Wasps worked their way back into the opposition 22’ and the old adage ‘if it ain’t broke don’t fix it’ came to mind, after another well constructed maul brought West down over the whitewash again taking the score to 12-3. A sliver of time just before the break was all that was needed for Rowland who picked her way through in a lovely run which ended the half 19-3.

The pace remained unabated for the first ten minutes of the second half, with some strong defensive work including great line out pressure from Wasps. Ten minutes in and Molloy gets the ball from a lineout with space to run: an offload to her Irish compatriot Cliodhna Maloney who ran a beautiful supporting line, brings the score to 26-3 after it is converted by Flo Williams. Pressure from Wasps continued to mount; another score shortly after from a well-executed crash ball from Sarah Mitchelson took the game out of Worcester’s reach.

Undeterred, a breakaway run from Worcester found a gap in Wasps defensive line and successful conversion from warriors made the score 33-10. A turnover straight from the kick off by Dalena Dennison brought the momentum back and another maul at the lineout brings Maloney her second of the match. Not to be outdone by the forwards pack, Lucy Nye picked the ball off the back of another dominant Wasps scrum on the 5m line to dot it down and polish off the match 47-10 to the home side.

Strong running lines from the backs bolstered the Wasps forward pack’s dominance in the set piece: a great performance to build on for next week’s trip to Gloucester-Hartpury.