The cricket season is not over: Harlequins posted the first century in the Tyrrells as Richmond were sent back up the A316 carrying with them a 0-101 defeat at the Stoop. They won’t be thanking the fixture-setters for offering them the two finalists (twice over) for their first two games.

Simon Middleton had promised to be in attendance; we may wonder what lessons he learned. This result was exactly what the Tyrrells didn’t need if it wanted to prove its competitiveness.

The chasm-like gaps building up in the elite division last season now need more dramatic adjectives to describe them.

So the clubs that finished in the last four places in 2018-9 all lost. But there were encouraging signs: Waterloo held their own till half-time (7-12), after that the visitors raced away with five tries.

Sharks disported themselves well in the East Midlandsgoing into half-time in the lead 5-7, but, as at Blundellsands, they couldn’t keep up the pressure.

The three sides most likely to fill the middle portion of the table all did well. Bristol finished only 15 points behind the champions and gained a try-bonus; to explain themselves, Sarries may well claim they had ‘only’ eight of their multitude of Red Roses on board in the West Country.

Glos-Pury travelled well to the north-west to finish their first game on the front foot; and Wasps flourished at home in the second half.

There was a distinctly small crowd in attendance on a lovely day to watch Warriors attempt to start a Tyrrells season on a positive note. For much of the first half they did just that. Indeed it took Wasps over half an hour to put an attack together that swept across the opposition line to score. Try to Hannah West.

All the Warriors had to show for their efforts tll then was an early penalty kick from a distance by Vicky Foxwell.Other assaults had foundered, some very close to the line.

Decision-making in midfield may have been faulty. The ball rarely found its way into the wingers’ hands, even when they seemed to have space in front. But then, Lydia Thompson wasn’t playing today. There was plenty of go-forward, but all too often a handling error or a questionable option thwarted the chance of a decisive score. 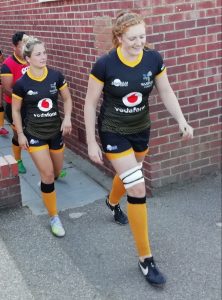 Wasps’ new-look pack took an early advantage over its opponents. Harriet Millar-Mills can’t be called ‘new-look’, but she has been missing for so long. She made a huge difference to the team’s performance, puncturing holes from No 8 in the cover defence and linking with the facility that has always characterised her game.

In front of her a new signing, the experienced Kiwi Dalena Dennison, made a major contribution to her side’s dominance. Out behind, Abby Dow, operating at No 15, was increasingly influential with her counter-attacking and slicing runs.

As the second half wore on, so Wasps came more and more into the game. The pack subdued its tiring opposition, opting for scrums rather than penalty kicks. This approach brought its fruits: two tries came through Cliodoha Moloney and Sarah Mitchelson.

Warriors at last found the fluency to find their way to the line. Carys Cox, England’s Under 20 full-back, made an exciting break to offer a scoring pass to Ffion Lewis.

But Wasps weren’t to be denied. As the pack took control, a second try by Moloney and a final offering by Lucy Nye, gave the hosts the start to the season their DoR, Giselle Mather, must have been looking for.

But like all good coaches she had plenty to carp about afterwards.