She played at the Netball World Cup this summer and at two Commonwealth Games – now Fionnuala Toner is bringing her international talent to Team Bath for the 2020 Vitality Superleague season. 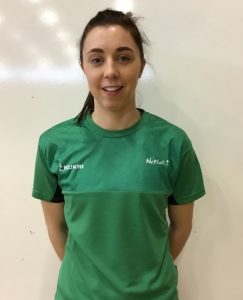 The Northern Ireland star and fellow defensive mid-courter Abi Robson have this week become the fifth and sixth players to sign up for an exciting Blue & Gold squad ahead of the new campaign.

Toner – who can play at goal-defence, wing-defence and centre – was vice-captain of the Northern Ireland side that finished tenth at the World Cup in Liverpool this summer, playing finalists Australia and New Zealand along the way.

She had also represented her country at the 2011 championships, as well as the Commonwealth Games in both 2014 and 2018, and has won 81 caps in total.

Her Superleague experience includes spells at Team Northumbria and London Pulse, where she finished the 2019 season with most interceptions after appearing in all 18 matches for the new franchise, and now Toner is looking forward to a new chapter in the Blue & Gold.

“It was an easy decision to come to Team Bath,” said Toner who, away from court, is a financial services manager with Deloitte Ireland. “I was contacted by [Head Superleague Coach] Anna Stembridge over the summer and we’ve had some really good conversations about the club and the plans for the new season.

“I haven’t worked with Anna before but I’ve always been impressed by her as a coach and with the culture she has built here and with England previously. It’s something I am excited to now be part of.

“I feel my strengths are an ability to lead the game and I am fearless – I always respect the opposition but I am not scared to test myself against the very best.”

Toner had the chance to do just that at this summer’s World Cup in Liverpool, saying: “We don’t get the chance to play the likes of Australia and New Zealand very often and it was something we relished as a team. It was an amazing tournament to be part of, the atmosphere and the set-up was the best I have experienced.”

Stembridge said: “Fi is a great signing for Team Bath and she will bring so much to the squad this season. She is versatile, very good at winning ball and a fearless character on court which I love. She’s also very experienced and knows what it takes to be the best you can be against world-class opposition.

“Off the court Fi is incredibly bright, super organised and considered, traits that are reflected in her game. That calmness combined with a ‘get stuck in’ attitude will make Fi a big asset.”

Stembridge feels those qualities are also shared by rising Blue & Gold star Robson, who celebrated her 21st birthday this week by being been named in Team Bath’s Superleague squad for a third successive year.

“Abi is truly Blue & Gold and she will absolutely be one of our future leaders,” said Stembridge. “She just has something about her and is a coach’s dream to work with thanks to her willingness to go that extra mile.

“She has a brilliant ‘team first’ attitude and even when she isn’t playing she gives everything she has to ensure those who are on court are in the best place possible.

“Abi leads by example and irrelevant of what bib you give her or who she is up against, she will give it her all. She takes on board information and sticks to task exceptionally well, which is why she has such great impact wherever and whenever she is on court.”

Robson first played for Team Bath’s junior section in the 2012-13 season and progressed through the performance pathway before making her Superleague debut in 2018.

She gained more big-game experience last season with a number of impactful performances off the bench and also demonstrated her leadership potential by captaining Team Bath’s U21s in the NPL (Netball Performance League).

“It’s such a privilege to play among such experienced players week in and week out which has massively helped my game,” said Robson, who is a Geography student at the University of the West of England in Bristol.

“The facilities are world class and it’s an amazing training environment – the people here have created a great culture which is amazing to be a part of.”

Robson and Toner join Imogen Allison, Mia Ritchie, Rachel Shaw and Eboni Usoro-Brown as the players confirmed so far in the Team Bath squad for 2020.

Season tickets are now on general sale for the new campaign, which gets under way in February and will see Team Bath play nine home matches, one more than in 2019. The price per fixture has remained the same and among the other perks for season-ticket holders is an invite to an exclusive reception to celebrate the Superleague’s 15th anniversary. Visit netball.teambath.com/tickets to find out more.