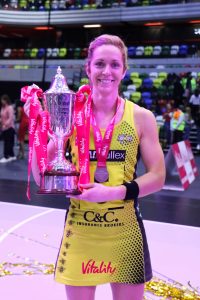 The 35-year old centre is the North West side’s latest signing for the 2020 campaign and takes the number of names announced to seven.

Caroline has played a highly influential role since joining Thunder for the 2018 season and provided vital leadership on and off court in the Championship-winning 2019 season.

She has had a busy summer, captaining the Northern Ireland side at the Netball World Cup in Liverpool in July which finished in 10th place and taking her Gaelic Football team, Armagh, to the quarter-finals of the All Ireland Championships.

Speaking about committing to Thunder for 2020, Caroline said: “I’m delighted to sign on with my third season at Thunder after such a great year last year. We have the best fans in the league and it’s an absolute privilege every time I get to represent this franchise. I can’t wait to get back on court and defend our title.”

Thunder’s Director of Netball Karen Greig added: “Caroline is a key signing for us and I’m delighted to have her back with us for another year. The last two seasons she has really become a lynchpin for us – the speed and control she gives us in attack can be unstoppable. I can’t wait to work with her again and see her partnership with Ash Neal develop.”