Children at the Zaatari refugee camp in Jordan have received over 1,000 pairs of football boots following donations from fans around Europe as part of the UEFA Europa League Trophy Tour – driven by Kia. 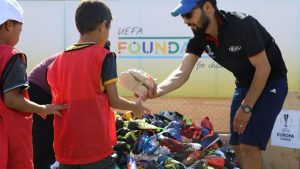 In partnership with the UEFA Foundation for Children, Kia handed over more than 1,000 pairs of football boots to the Zaatari refugee camp in Jordan, which is home to more than 80,000 displaced Syrian refugees.

“Having visited the Zaatari refugee camp, I have seen first-hand just how much the youngsters love playing football and what the game means to them,” said UEFA President Aleksander Čeferin.

“The UEFA Foundation for Children helped to provide pitches for the refugees to use, but until now they have lacked football boots. I would like to thank the fans across Europe who have donated their footwear and helped to make a real difference to those living at the camp.”

The donated football boots are already being put to good use, during the daily training sessions and weekly tournaments, which are organized by Jawdat El Melhem and Waed Shukri Al Shwamreh, the football programme coordinators at the Zaatari camp.

“Receiving the boots was a wonderful experience for the children and it filled their hearts with happiness and joy,” said Eman Ismail Al Awady, who is a female coach at the camp who runs training sessions for the children.

“The boots will encourage them to play football more often, while having access to regularly playing sports will help to support them physically and psychologically.”

Building on the success of its first UEFA Europa League Trophy Tour, Kia will continue to collaborate with the UEFA Foundation over the coming season in order to aid disadvantaged children at Zaatari.

“Thanks to the donations of fans, we were able to help coordinate a positive contribution to the lives of young refugees who share our passion for the beautiful game,” said Artur Martins, senior vice-president global brand and marketing at Kia Motors Corporation.

“On behalf of Kia, I would like to extend our thanks to everyone who supported the campaign and helped by donating football boots.”