Fresh from being named in the England senior squad for a first time, Imogen Allison has become the fourth player to sign up to Team Bath Netball for the 2020 Vitality Superleague season.

The tenacious wing-defence is rated as one of the most exciting prospects in the country, with her dynamic displays earning Allison a nomination for the 2019 Superleague Young Player of the Year Award and a place on the Roses’ Futures Programme. 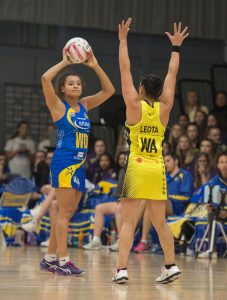 She also demonstrated her leadership skills by taking on the captaincy while Eboni Usoro-Brown and Serena Guthrie were on international duty last season, leading the Blue & Gold to a first-ever victory at Strathclyde Sirens.

It means that Allison has a busy year ahead as she combines club and international netball with a Sports & Exercise Science degree at the University of Bath, where she is supported by a King Scholarship, but she is looking forward to the challenge.

“It’s great to be back with Team Bath for another Superleague season, I can’t wait to get going,” said the 21-year-old who is all set for a fourth campaign in Blue & Gold.

“I felt like I really grew into my role in the team last season and being named as captain was a great experience. I enjoy the leadership role and hopefully I’ll have more opportunities like that going forward.

“It’s really exciting to be back in the England set-up too. It feels like a great time to be with the Roses, especially for athletes of my age as we look to build on the success of the past few years.

“I was part of the England U21 squad when I first came here and won bronze at the World Youth Cup in 2017 but have decided to focus on my university studies over the past couple of years. I’ve gone back into the Futures programme as that will allow me to continue concentrating on my degree.

“I’m grateful for the support of both Team Bath and the University of Bath in helping me balance study and sport, they have always made sure I have the backing and structure to do well in both my careers.”

Team Bath Netball Superleague Head Coach Anna Stembridge said: “I am absolutely delighted that Imo will be returning to the Blue & Gold this year. She was brilliant for us last season and took her game to a whole new level, not just technically and tactically but the way in which she controlled the line and led from the front.

“I believe she is one of the Superleague’s brightest stars and one of our club’s future leaders. I am very excited about building upon Imo’s performances and leadership from last year.”

The experienced trio of Usoro-Brown, Rachel Shaw and Mia Ritchie have also signed up to Team Bath for the new Superleague season, which gets under way in February.

Season tickets are now on general sale for the 2020 campaign which will see Team Bath play nine home matches, one more than in 2019. The price per fixture has remained the same and among the other perks for season-ticket holders is an invite to an exclusive reception to celebrate the Superleague’s 15th anniversary. Visit netball.teambath.com/tickets to find out more.