Manchester Thunder’s Eleanor Cardwell will be back in black and yellow for the 2020 season as the England Rose re-signs for the Superleague Champions. 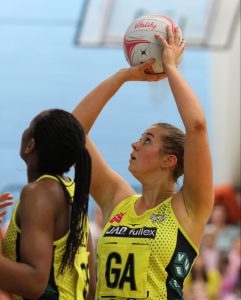 The 24-year old shooter, who was key to securing the victory in the 2019 Grand Final against Wasps when she came on in the final minutes, rejoined Thunder last year and proved invaluable in providing options in the shooting circle.

She has now put pen to paper on a two-year deal which will keep her in the North West – the region where she grew up and rose through the ranks from youth level to Superleague – until at least 2021.

Eleanor is Thunder’s latest signing for the 2020 campaign following the re-signing of Laura Malcolm and Kathryn Turner and new addition Ashleigh Neal.

Speaking about the news, Eleanor said: “I’m so excited for this upcoming season and to see how we can build on the last and try and reclaim the Superleague title.

“First of all we’ve got the Fast 5 this autumn during which we will be able to show off our flair and why we won last year’s Superleague title.

“One thing that really brings Thunder together and gives us the edge is the amazing Manchester crowd. I can’t wait to see everyone at our first home game cheering us on loud and proud.”

Thunder’s Director of Netball Karen Greig added: “What an end to the 2019 season from Eleanor as she showed beyond any doubt how integral she was to our Championship-winning team. She grew throughout the season for us and developed key partnerships within the attacking unit.

“I’m so happy to have such an influential and calm key moment player back on board and looking forward to building further with her into the coming season.”