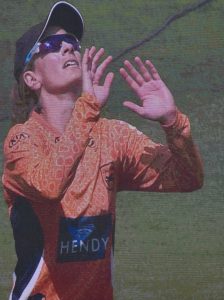 The scene was set. As for last year’s finals, there was razzamatazz, in the form of crowd-pleasing pyrotechnics and an opera singer.Both captains Tammy Beaumont (Vipers) and Georgia Elwiss (Lightning) gave interviews, live on SKY TV. Lauren Bell replaced Issy Wong for Vipers. Shabnim Ismail (Lightning) and Linsey Smith (Vipers) were tipped to play by various pundits – but didn’t.

Georgia Elwiss won the toss and decided to bat. Lauren Bell (2-23; 15 dot balls) struck early, removing Lightning’s openers Amy Jones (9) and Sri Lanka’s Chamari Atapattu (10) within three runs of each other at only 24 on the board. Both Georgias added 55 before Australia’s Amanda-Jade Wellington (13 dot balls) removed Adams, caught by New Zealand’s Suzi Bates. 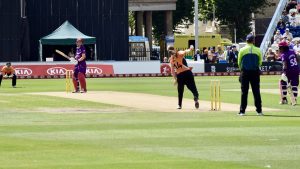 Suzi Bates (3-22) wrapped up the tail-end, taking 3 wickets in 5 balls. She also bowled Kirstie Gordon first ball for a golden duck and Sarah Glenn (4) was caught off her bowling by Fi Morris (1-20).

Vipers’ batters scored twice as fast as Lightning’s until the powerplay (11.5 vs. 5.5). Openers Suzi Bates (37) struck Vipers’ 50 with a six, during the fifth over. With the score on 67-0 in the sixth, Danielle Wyatt (31 off 17 balls) sent Jenny Gunn over the boundary, off the bowling of Jo Gardiner. Gunn might have saved two runs by dropping the catch but she also gave Wyatt a reprieve. 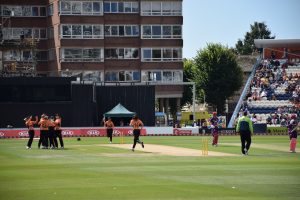 Lightning fought back when England pairing Georgia Elwiss, off Kirstie Gordon tricked Maia Bouchier off a mis-field to run herself out. After Tammy Beaumont (24 off 19 balls) was clean bowled by Jenny Gunn, Vipers’ scoring rate normalised. Amanda-Jade Wellington made double figures and Fi Morris (7) stole singles until bowled by Elwiss (at 123-5 during the 15th over).

One final dramatic moment saw South Africa’s Mignon duPreez drop Wellington off the bowling of Gunn (1-30). Both Wellington (18*) and Paige Scholfield (12*) struck four runs with six balls to spare – to qualify Vipers for a place in the final.

One catch, as Vipers were aware, the final match had to be played straight away. Meanwhile the departing Lightning team had suffered a second year’s semi-final defeat. Understandably there were a few tears.

Scorecard can be viewed here>https://www.ecb.co.uk/matches/10498