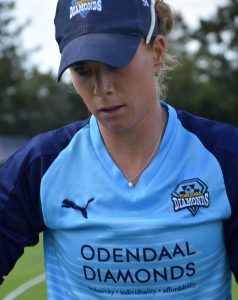 Opener Lizelle Lee, who scored a century in last year’s KSL finals for Stars versus Lightning, was caught (28) by Hollie Armitage off the bowling of Alice Davidson-Richards. Further down the order, South Africa’s captain Dane van Niekerk launched a crowd-pleasing six out of the ground – resulting in a lost ball, ending on 32.

Leading Diamond’s reply, captain Lauren Winfield (7) was caught behind by Sarah Taylor. Once Australia’s Alyssa Healy (38) was caught by England’s Laura Marsh off Amy Gordon, Diamonds had made a solid start. Hollie Armitage (24) was run out by Bryony Smith’s direct hit – flashing back to memories of Headingley, where Diamonds lost their wickets to direct hits and similar misjudgements.

Having dismissed Healy, Amy Gordon dropped a dolly-of-a-catch from India’s star Jemimah Rodrigues off the bowling of Stars captain Natalie Sciver. At 72-2 it was game-over for Stars. Diamonds required one run per ball as they passed the 100 mark and Rodrigues was still standing at the crease.

Sciver bought herself on (bowling from the railway end); paired with Marsh (from the pavilion end.) Their series of dot balls collected Marsh two crucial wickets as the match entered its final over. Once again, the South Africans played a crucial part. Firstly Alice Davidson-Richards (8) was snapped up by Dane van Niekerk. Secondly Katie George was caught out for a golden duck by Marizanne Kapp, also off Marsh.

It was a cliff-hanger ending with just two balls remaining. Faced with a difficult dilemma, top-scoring Jemimah Rodrigues steered Marsh through a gap to penetrate a tight field scoring four runs to snatch victory. Scoring a single would have lost her strike on the final ball. Rodrigues finished undefeated on 42.

You can watch a behind the scenes video of Lauren Winfield from 2016 here.

Match scorecard can be viewed here.

Both Georgias (Captain Elwiss, and Adams) staged Lightning’s mid-order recovery aided by Mignon du Preez (former captain of South Africa) who scampered18 runs off ten balls – nudging Lightning’s score beyond 60. Captain Georgia Elwiss made 38 while Georgia Adams slammed three fours and three sixes to claim her half-century off 33 balls. By the time Kathryn Bryce (32 off 18 balls) fell to Ecclestone, Lightning’s benchmark target of 150 had been exceeded within their twenty overs.

Once Lightning’s Kirsty Gordon (3-18) prompted two more ducks for Thunder’s Emma Lamb and Sophie Ecclestone, play was stopped mid-over. Umpires had no appetite to continue as heavy rain fell and both sides took an early night.

Match scorecard can be viewed here.