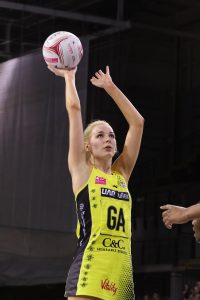 The influential 26-year old shooter will be back for her 11th season in 2020 as the black and yellows look to defend their title.

Kathryn is the second player confirmed to be back at Thunder after Laura Malcolm’s re-signing was announced earlier this month.

Speaking about her decision to return, Kathryn Turner said: “I’m delighted to be back at Manchester Thunder for my 11th season. Time has certainly flown! Winning the Superleague was an amazing experience with an amazing group of players, it’s brilliant to return for another year and we’re determined to do all we can to defend our title.”

Thunder Director of Netball Karen Greig added: “Kathryn has been a crucial part of our rebuilding over the past three years and unstoppable at times in the GA position. I couldn’t be happier to have her back for 2020.

“She showed in the incredible 2019 Grand Final that she can step up for the big games and be counted. We have seen her game develop and improve over the past 18 months and I’m excited to see how she’ll continue to develop in the season ahead.”