England’s women’s team moved one step closer to qualifying for the EuroHockey Championships semi-final with a valuable 1-1 draw against a strong German side. 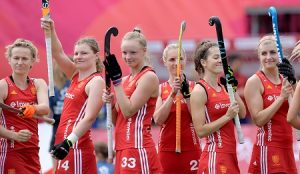 Initially taking the lead with a sumptuous Lily Owsley strike, England were good value for their half-time lead having limited Germany to few opportunities whilst looking a threat on the offensive.

Germany enjoyed their brightest spell of the game in the third quarter and were able to produce an equaliser courtesy of Hannah Gablac who tapped in at the far post.

England held Die Danas at bay for the remainder of the match to ensure they got something from the game, taking their tally to four points after two games, meaning that victory against Belarus on Wednesday will guarantee a place in the final four.

Germany started well, earning a penalty corner inside the opening five minutes and though this was well defended, they still had good field position which saw Kira Horn fire just wide of the target.

England were looking potent in attack too, Jo Hunter stretching the defence and earning a penalty corner where Giselle Ansley’s well struck drag flick was well blocked by the left glove of Julia Sonntag.

Both sides looked evenly matched in a tight opening-half, but it was England who took the advantage going into the break. A weaving run from Jo Hunter on the right flank and precise pull back found Owsley with time and space to lift the ball into the roof of the net with a composed finish.

Mark Hager’s side had contained a strong German outfit that had demolished Belarus 13-0 in their previous game and were good value for their 1-0 lead at half-time.

Germany got back into the match with a spell of good attacking pressure in the third-quarter and forced Maddie Hinch into making three saves inside two minutes as well as striking the post during a flurry of chances.

As the clock ticked down on the quarter, Germany ramped up the attacking intent even more as the ball was flashed across the face of goal and somehow evaded everyone.

With less than thirty seconds remaining in the quarter Die Danas got the goal they’d been seeking, Gablac getting the final touch on Anne Schroder’s driven attempt on goal to set up a tense final fifteen minutes.

Shona McCallin made a superb stop on the post to deny Germany from another well worked penalty corner to keep her side in the game.

Hunter again looked lively in attack but couldn’t quite stretch far enough to make clean contact with the ball as her sliding attempt fell kindly into the ‘keeper’s path as both sides failed to find a way through to claim victory.

Lily Owsley commented: “We’re frustrated because of the scoreline – we were 1-0 up but should have put it to bed. At half-time we knew we had to get the next goal or teams come back into it. It happened yesterday and it happened today. It’s frustrating but a point against a strong side like Germany is good.”

“We will be in a position where we know what we need to do against Belarus, so it’s all about recovery now. We’ll learn, we’ll recover, chill out a bit and bring it for the game on Wednesday.”

England’s final match of the group stages comes on Wednesday 21 August against Belarus at 9am BST knowing that victory will secure their place in the semi-finals.