Anyone who regularly follows this site will have seen the articles promoting young Ziana Butt and her quest to represent England at the World Championships in South Africa this summer. On her return, after an amazing experience, we asked her to reminisce a little about her experience. So, in her own words here are some of Ziana’s memories from the England Nets U21 Squad Tour to South Africa for the World Indoor Netball Championships 2019. 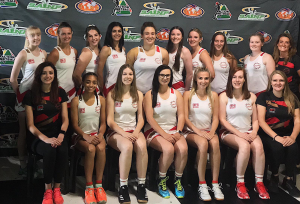 “The immense surge of pride I felt stepping out on court in my England dress and singing the National Anthem is a very difficult emotion to describe. I had been training for 18 months leading up to this moment but the Championships far exceeded my expectation both mentally and physically.

We were up at around 4:30am most days as the games often started at 8am. We would start and end the day with ice baths and often in-between, getting back to the hotel in the evening with just enough time to eat, have a team debrief and a short rest while we prepared our bags for the following morning.

During the first few days of training when we arrived in South Africa, the squad physio showed us how to strap our ankles, as the main players had to get up and strap our ankles everyday to ensure we did not get injured. This was completely new for me having never before strapped my ankles.

I had just a day between the England Netball NPL tournament where I played in the London Pulse U19 squad and leaving for South Africa. Whilst indoor netball is a little different to normal netball, I had not expected the sheer strength, speed and agility of players in the other U21 teams. The fact the ball never goes out of play means you need real stamina and it took energy gels, shots, drinks and sweets to keep us going when we had 3 to 4 games a day and felt exhausted but excited with the adrenaline rush of representing our country. 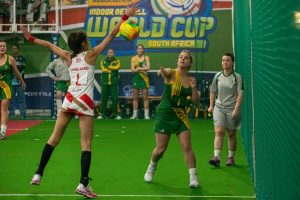 The U21 squads from the other countries were in general bigger and older than us with much more experience as they play Indoor Netball throughout the year. I was one of the three youngest players at the tournament. I would feel a lot more pressure when games were live streamed as you are then conscious that all your family and friends are watching and I didn’t want to let them or my team down.

The elation we all felt when we got through to the preliminary final of the 6s was intense as was the pressure to get through to the final. By this stage after days of shooting long bombs outside the D my upper arm muscles were sore but the adrenaline and desire to bring home a medal kept me going.

All the parents who came along to support us were great. My mum and dad say they all went hoarse screaming as the adrenaline charged and fired them all up to encourage and support us to win.They had brought flags, batons and England T-Shirts and they were all amazing.

The 7s tournament was surprisingly harder as the other teams had more experience not just through years of experience and game play but more access to facilities to practise use of the net. Our net skills were not as developed as there are so few Nets courts in England. This was upsetting as we had a great squad but at times it felt like we just couldn’t match their skill which they had refined over years of Net play. 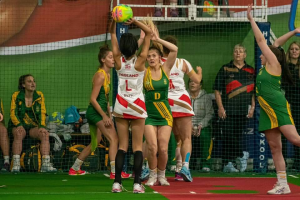 The Gala dinner was so efficiently organised as was the whole tournament. The medal giving ceremony, the slide show reflecting the whole tournament, the delicious food and stunning evening wear was a fabulous conclusion to a tough tournament where everyone gave it their all. I also experienced first hand things like the New Zealand Haka Dance. This was one of the most powerful memories I will take from the tournament.

The overall experience was incredible. I not only fulfilled my dream to represent my country but I was in the starting seven for 14 of the 15 games across both tournaments. To top it off I earned 15 England Caps and we were all awarded an England Roses pin at the end by England Netball which I will treasure. I have made new friends in South Africa, New Zealand and Australia, exchanged clothing and details with them and we will all stay friends for life. 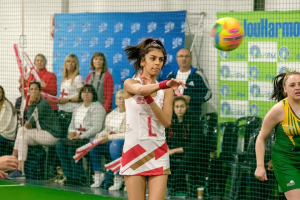 I must also mention just how beautiful and scenic South Africa is. It was incredibly developed, the roads were better than the UK which surprised me. The people are so friendly, the food portions huge and I was lucky enough to explore Cape Town on my day off between tournaments and then go on Safari the day before returning to England. I hope I can go back in summer one day as the country has so much picturesque beauty to share.”

Our thanks to Ziana for sharing her experiences with us, and look forward to following her sporting career since I,  for one, am convinced that this is just the beginning and there is much, much more to come.