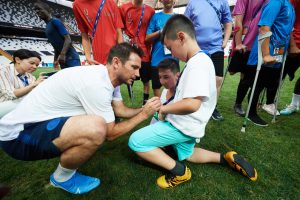 Since it was established in 2015, the UEFA Foundation for Children has become a key presence at the UEFA Super Cup, demonstrating that football, and sport in general, has a positive impact on children and can change the outlook of even the most vulnerable.

This year in Istanbul, at the opening ceremony, a mixed choir of amputee kids from the Turkish Sports Federation for the Physically Disabled and the singers of the Turkish Radio and Television’s polyphonic children’s choir, will perform Bob Marley’s ‘Three Little Birds’.

The support of the players of Liverpool and Chelsea will highlight that football leaves no one aside, a strong message of integration, solidarity and hope. The youngsters will have the chance to meet players from both teams and kick a few balls around.

UEFA’s president and the chairman of the UEFA Foundation for Children, Aleksander Čeferin, will also promote this message during the cup ceremony, where he will be accompanied by Ali Turganbekov, a young Kazak boy with no legs, who has a passion for football and dreams of becoming a Paralympic champion. 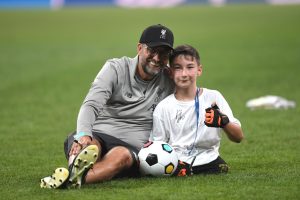 “The children from the choir and Ali Turganbekov demonstrate that strong beliefs in their dreams can help them overcome many obstacles,” said Aleksander Čeferin. “We pay respect to all disabled children in football or other sports, who give their best and lead an active lifestyle. We hope they will motivate many others to follow their example. Moments like this can make all the difference.”

Mr Arif Ümit Uztürk , the president of the Turkish Sports Federation for the Physically Disabled added:

With courtesy of the UEFA Foundation for Children