Lithuania’s Laura Asadauskaite claimed her third gold medal on British soil as the 2019 Modern Pentathlon European Championships came to a thrilling conclusion at the University of Bath Sports Training Village. 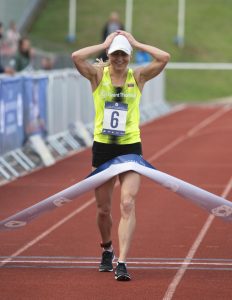 The London 2012 Olympic Champion replicated her performance from when Bath last hosted the Europeans four years ago, powering through the field with an outstanding run-shoot to take the women’s title in magnificent fashion.

“It’s been a good day!” said Asadauskaite, who had already secured a Tokyo 2020 Olympic qualifying place by winning World Cup Final gold in Tokyo last month. “I was composed in the shooting and I ran fast, so I’m very happy.”

Kate French, who performed consistently well across all disciplines, also earned an Olympic place for Pentathlon GB by coming home in second.

She went into the laser-run in that position and took the lead after the second visit to the shooting range before eventually being hunted down by Asadauskaite midway round the third lap. French held her form well to bring home the silver medal, matching her achievement at the 2018 Europeans.

“I’m over the moon with second place,” said French. “I had to really fight today, nothing really came easy. I had a really good ride, which I was so pleased with and that put me in a good position for the final event. 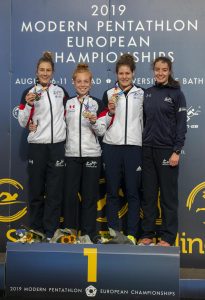 “I just had to hold on really – I had Laura chasing me down. I did try and stay with her but she’s so fast.”

Iryna Prasiantsova of Belarus, a relay champion at both the World and European Championships in 2018, earned herself an individual medal this time as she came home in third having started the run-shoot with a narrow five-second lead.

“I feel so happy because it’s the first time that I get the podium,” said Prasiantsova, whose excellent display in the fencing arena propelled her into medal contention. “All day I worked and tried to stay confident and focussed on my event.

“It was a tough race and I knew that before the laser-run that Laura would keep pressuring me, so I am so happy that I have got third place. I enjoyed the whole day.”

Finishing just outside the medals was Britain’s Jo Muir who, inspired by the roar of the home crowd, produced a storming run-shoot to climb from 14th to fourth and, along with Francesca Summers’ brilliant seventh-placed finish, helped to secure team gold for the host nation. Jess Varley, the other Brit in the field, was 26th. 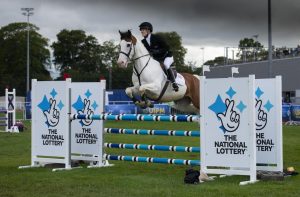 Muir said: “I knew the laser-run was my strongest and I was really trying to catch the podium position. I’m a bit disappointed with my shoot but the last round made up for it.

“It was amazing and Kate was amazing all day, she’s such an inspiration, it’s really cool to be trying to follow in her footsteps and have her as a team-mate to push each other on.”

Summers added: “I knew I had a lot of strong athletes around me but I went and did my race and I’m really glad I managed to overtake someone on the finish line. There is a lot more for me to give and I’m excited to see what the next competition brings. Winning team gold in front of the home crowd is amazing.”

The women’s final brought to a close a brilliant week of competition at the University of Bath, which attracted hundreds of spectators across six action-packed days.

They were treated to some memorable performances from the home team, with Britain winning five gold medals – including the men’s title for Jamie Cooke – and a silver for French.

Pentathlon GB CEO Sara Heath said: “Thank you to all the volunteers and officials for helping to make the championships so successful and thank you to the supporters who came out to back all the athletes, they have made it an amazing week.

“For Britain, winning five of the seven gold medals on offer is fantastic and I am incredibly proud of all the athletes, coaches and staff.”

It is the second time in four years that the University of Bath – home to Pentathlon GB’s National Training Centre since 1999 – has successfully hosted the European Championships and Director of Sport Stephen Baddeley was delighted with how the week has gone.

“We are so proud to embed even further the very strong relationship that the University of Bath has with the sport of modern pentathlon,” he said.

“The volunteers, officials and event organisers have been absolutely outstanding and it has been a great experience. There have been great crowds and a really good atmosphere in all of the venues, so it has been a fabulous event for the city of Bath.”

Story of the day

France’s Elodie Clouvel, who won silver at both the 2015 European Championships in Bath and the Rio 2016 Olympic Games, got off to a flying start as she set the fastest time of 2:10.03 in the London 2012 Legacy Pool – more than a second quicker than her qualifying time.

Iryna Prasiantsova of Belarus produced a fantastic fencing performance to move up to second overall with 27 wins from her 35 bouts. Compatriot Volha Silkina also impressed with the third-best total of 23 wins, just one behind Clouvel who extended her overall advantage.

Germany’s Janine Kohlmann, London 2012 Olympic Champion Laura Asadauskaite of Lithuania and Hungary’s Sarolta Kovacs put themselves firmly back in the medal mix with fine performances and French produced a strong finish to the round to climb up to seventh both in the fencing and overall. She carried that form into the bonus round, gaining four more valuable points to advance two further places.

Summers was among the leading pack for most of the ranking round and, despite a blip towards the end, came away with 20 wins while Muir and Varley recorded 16 and 11 victories apiece.

The sound of thunder greeted the start of the riding round and while the rain mostly stayed away, the slippery course conditions provided a major test for the competitors with some of the early riders being dismounted.

There were four eliminations too, with leader Clouvel seeing her hopes of a medal unfortunately dashed by four refusals in the last ride of the afternoon. Russia’s Guinaz Gubaydullina had suffered a similar fate on the same horse in the first round.

French was one of only five riders to go clear as she recorded the second best score of 296 points, moving her up to second in the overall rankings behind Prasiantsova who advanced one place thanks to a steady ride where she picked up just 17 penalties.

Good rides saw Silkina consolidate her hold on the bronze-medal position and Ireland’s Natalya Coyle move up to fourth, while a clear round helped Poland’s Oktwakia Nowacka move from 13th to fifth.

Russia’s Adelina Ibatullina was the only rider to record a perfect score of 300 and GB’s Summers climbed into the top-ten rankings after conceding just ten time penalties. Muir and Varley also impressed in testing conditions, placing seventh and 13th in the round to move up the leaderboard.

Prasiantsova held a five-second lead going into the laser-run but was quickly overtaken by French. However, Laura Asadauskaite – who started sixth – was moving ominously through the field and she had taken the lead by the midway point of the third lap and went on to win by nine seconds.

French and Prasiantsova held their nerve and form to keep the chasing pack at distance and secure the other two medals, while Muir performed superbly to finish fourth and complete a strong afternoon.