Two more games in the Kia Super League, two more wins for the southern franchises. The Guildford match was over in a trice; the Vipers had to hold their nerve at Haslegrave to squeeze home against Lightning in the final over. 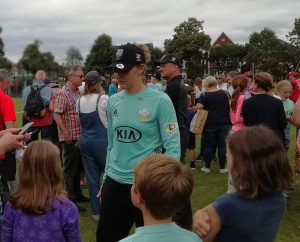 Surrey Stars followed convention by inviting the visitors to bat first. Marizanne Kapp started the rot by trimming Sune Luus’s bails with a magnificent delivery. The catch of the day brought the fourth wicket: Aylish Cranstone ran back at short third to hold on to a lofted edge by Thalia McGrath off Nat Sciver.

We have to wonder why Harmanpreet Kaur was held back till No 5. Sophia Dunkley can certainly hit the ball hard, but today she went cheaply for 2, lbw to Dane van Niekerk who bowled her leggers excellently (3-20). It meant that Kaur was at the crease for ‘only’ 13 overs. In so abbreviated a game, you really need your power batters in for as long as possible.

By the time the Thunder innings ended, Kaur had scored 58* with 6 fours and 3 sixes. This was an outstanding display of timing and placement.

Had she not stayed right through, the Red Roses would have struggled to reach a team century. Even so, their total of 120 looked inadequate, even before Lizelle Lee came in to make the Guildford ground look Lilliputian.

When she was very well caught low down by Luus off Alex Hartley for 66, the Stars needed only 13 more runs off 7½ overs. As Sarah Taylor was motoring along happily at the other end (36*), the local support – and there was plenty of it, of all ages – could relax totally.

With the game finishing after only 34 overs, the players were even more generous than usual with their time post-match. Long lines of young fans waited patiently for caps and bats to be autographed and selfies to be granted by their heroes. The free scorecards were another plus mark for Guildford.

This was an altogether tenser affair. The home batters all made useful contributions both Georgia Elwiss and Mignon du Preez scoring at more than a run a ball, but no-one could get away from the bowling till Jenny Gunn came in to hit 17 off only 7 balls. She and Amy Jones managed the only two sixes to be struck in a total of 135. Would it be enough?

The Vipers’ innings followed a typical patter: the leading batters all made a decisive contribution – the solitary exception being the skipper, Tammy Beaumont, who bagged an unwelcome duck –  but after them the wickets fell regularly.

Danni Wyatt (40) got them off to another hard-hitting start. Suzie Bates (22) and Stafanie Taylor (38) saw the total well past the half-way mark, but then the procession began. As the tension mounted, Vipers descended from 80-2 to 116-7 with only 13 balls left. Greatly to their credit they squeezed home with three balls to spare.

The crowd got their money’s worth, though most were supporting the purple-and-pinks.

It was gratifying that home-grown players played a more central role here than at Guildford. There it was Kaur, du Preez and Lee who dominated. Of course English players did good things, not least Sarah Taylor with another remarkable display of making wicket-keeping look like child’s play.

But as I argued last year it’s hard to fathom why as many as three overseas players per franchise were thought advisable.

In the northern leagues, one overseas professional was considered right and proper from Learie Constantine onwards; his influence on the team would be considerable. In later years it might be two – Richard Hadlee and Clive Rice had a profound effect upon Nottinghamshire’s cricket fortunes in the 1980s.

But three? – especially when the third of the trio may well be at the very start of her career. The set-up seems to favour these overseas players to the detriment of the very people the ECB is trying to aid.