After the desolation of a trouncing by the Australians can English cricketers return to the sort of form that won them a World Cup so recently?

Well, the shape of the KSL allows them to enjoy lots of help from outsiders, not least some of the self-same Aussies. This is its last season. We can leave a verdict on that decision to another day, but some of us share Lydia Greenway’s disapproval of the draft system. ‘At least’, she says, ‘let’s leave a legacy’.

The first round got off to a cracking start with three games played out over a large span of August 6.

The two sides stood 2 victories-all as Kate Cross, captaining a side for the very first time ever, had Suzie Bates taken early for 1. But Vipers reached 66-1 off 8 overs as Danni Wyatt (42*) and Tammy Beaumont (22*), both hitting sixes, got the southerners off to a furious start. The Lancashire bowling is their strength with Cross, Alex Hartley and Sophie Ecclestone all able to turn a game. But it came under huge pressure.

Cars were struck with some regularity until owners sensibly moved them. By half-way the Vipers had posted 86-1. Sophia Dunkley held a catch on the boundary rope but couldn’t help stepping over.

Beaumont hit three successive 6s and the 100-partnership came up in the 12th over. It was carnage.

Wyatt finally drilled Emma Lamb to extra. (54 off 39 including 10 fours). Vipers reached the summit of their achievements the moment that Beaumont was dismissed. (53 off 33, including 2×4 5×6 – the current record for sixes is 6).

From there the innings set a pattern to be followed right through the day. The remaining batters couldn’t maintain this headlong advance.

Stafanie Taylor struck a vigorous 40, but after her no-one topped 5. Once more Ecclestone returned a memorable analysis, 4-0-12-1.

A total of 166-7 was creditable, but way below what the optimists had been expecting.

Georgie Boyce showed the Red Roses the way with a heartening 43 off 41, but once Thalia McGrath, the young Aussie, fell to the first of Wyatt’s two wickets, only two other batters reached double figures, and one of them was the skipper (18) coming in at No 10. Tash Farrant took two late wickets to ensure Lancashire were bowled out within the 20 overs.

Two of Lightning’s leading imports, Hayley Matthews and Chamari Athapathu, went for a combined total of 0. Georgia Elwiss followed for the same score (15-3), so it was just as well that Amy Jones was there to right the ship with a magnificent knock of 65. But as in the first match, the middle and lower order couldn’t provide sufficient ballast. Mignon du Preez (29) and Georgia Adams (15*) helped her reach 110-5, but by then only 7 balls remained.

The six Storm bowlers all played their part, none going for worse than 7½ per over.

Before the tournament started, it was hard deciding which franchise had the strongest batting line-up. but by the time Storm had polished off the target of 126, it looked as though Rachel Priest, Smriti Mandhana, Heather Knight and Fran Wilson might well take prime place. They had no need to rush, but they turned out to be the only one of the six sides not to lose an avalanche of wickets. 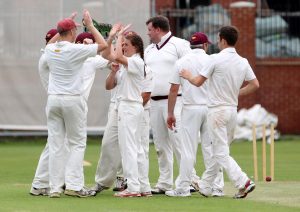 Stars won toss and batted. Lizelle Lee carted Linsey Smith’s first over for 10, but Lauren Winfield played her trump card as early as the third over. She brought on the teenage Tees-sider, Helen Fenby, to tease the opposition with her whirlwind leg-spinners. This is a youngster who played for her club 1st (men’s!) XI at the age of 15 and showed what a talent she possesses.

She captured the prize wicket of Lee then Bryony Smith, and there were more to follow.

In between, Sarah Taylor hit a glorious 43; with help from Nat Sciver and Dane van Niekerk she boosted the total to 117-5. But once more batting frailties meant the Stars could reach no further than 130-9.

The White Roses had Alyssa Healy on the strength, straight from her demolition of England’s Ashes hopes. She powered her way to 31 but then Mady Villiers, taking up from her wonderful debut at the tail-end of the Ashes, dismissed her.

Winfield also scored 31, but it took her twice as long. Her policy was obviously to play the long game, but when she was bowled by Sciver, her side still needed 34 off 5.1 overs. You’d suspect 31 out of 97 was not the scoring-rate the Yorkshire skipper had intended.

It will be interesting to see how many KSL teams manage to achieve this sort of target when all their leading batters are back in the hutch. There are capable hitters in the lower orders, but today none of them could produce the goods.

Sadly, an eminently winnable game finished in an 9-run defeat for the Diamonds.

So once again the South could lord it over the North. Three wins out of three.