There was a dream start to the 2019 Modern Pentathlon European Championships for the host nation as Myles Pillage and Kerenza Bryson won mixed relay gold on the opening day of competition at the University of Bath Sports Training Village.

The young Pentathlon GB duo, who both hail from Plymouth, provided a vocal home crowd with plenty to cheer throughout the day as they won the swimming, fencing and riding disciplines to take a 40-second advantage into the decisive run-shoot. 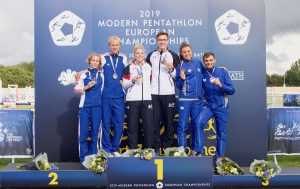 That lead never looked in danger of being eroded as mature performances saw Bryson and Pillage – a University of Bath student – finish well clear of Czech Republic duo Eliska Pribylova and David Kindl, who moved up from fourth to secure silver.

Italy’s Irene Prampolini and Valerio Grasselli completed the podium on a day when the other medal places changed hands on numerous occasions.

Pillage said: “It feels awesome. This is the first international gold medal I have won, so to do it with Kerenza is really cool. It was a really good day for us.

“It was about holding it together in the run-shoot and maintaining that big lead as neither of us had been in that situation before. Thank you to everyone whose support helped us do that.”

Bryson added: “It was great to have the home crowd behind us, you could really feel the support, although trying to shoot while people are cheering you was quite tough!

“I’d just like to also say thanks to the National Lottery for supporting us and to my friends and family.”

Silver-medallist Pribylova, whose fine shooting lifted her team into second spot, said: “We are really satisfied with that result. The whole day was full of surprises and this was the best result we could have hoped for – we would never have said we would be second at the beginning of the day because our fencing wasn’t the best.

“It’s really amazing to be here with the crowd and everything, it’s a really nice venue.”

Prampolini was pleased to win bronze, saying: “The horse riding and the final part of the fencing were the best parts of the day for us. We didn’t start very well in the fencing but Valerio and I got stronger after that and that gave us the power to go on.”

Pillage will be back in action on Wednesday when he partners fellow University of Bath student Oliver Murray in the men’s relay, while Charlie Follett and Zoe Davison represent GB in the women’s relay.

The National Lottery-backed 2019 Modern Pentathlon European Championships – dubbed Gladiators Return – are taking place from August 6-11 at the University of Bath Sports Training Village, home of the Pentathlon GB National Training Centre. More than 150 athletes from 25 countries are competing in the Tokyo 2020 Olympic qualifying event, with all five disciplines – swimming, fencing, riding and the combined run/shoot – taking place in one venue. Visit www.pentathlongb.org/euros2019/ for more information and to purchase tickets.

Both the European Championships and the mixed relay competition got off to a thrilling start in the London 2012 Legacy Pool as GB’s Myles Pillage chased down Russia’s Viacheslav Bardyshev to win Heat 2 of the swimming by just four-hundredths of a second.

The winning time was 1:56.46, while third-placed Lithuania were the only other nation to go under two minutes as they clocked 1:57.31.

Kerenza Bryson came to the fore in the fencing as GB again came out on top with 23 wins from their 36 bouts to maintain their overall lead. Ivan Khamtsou and Volha Silkina of Belarus also performed well to finish runners-up with 21 wins, moving them up to second overall.

The Hungarian duo of Illes Szabo and Sarolta Simon, who had been eliminated in the swim due to an illegal handover, gained some consolation for that disappointment by excelling in the fencing bonus round, achieving a rare clean sweep of victories in all nine bouts.

A testing riding round saw Pillage and Bryson extend their advantage with a skillful performance while their nearest rivals all suffered mishaps.

Despite her horse losing a shoe halfway round the course, Bryson only clipped one fence and then Pillage went clear as Britain collected 286 points out of a possible 300 – the joint best performance of the round.

Sikina of second-placed Belarus had earlier been thrown by her horse, while third-placed Lithuania were eliminated after four refusals for the unfortunate Dovidas Vaivada.

Slovakia’s Alica Lichancova and Filip Lichanec were the only nation to record a clear round, although they did pick up 22 time penalties, while solid performances from Russia and Italy moved them back into medal contention.

They started 40 seconds behind GB in the decisive run-shoot and that margin never looked under threat as Bryson and Pillage shrugged off any nerves they may have had to complete an excellent day of competition in style.

Bryson had already completed her first visit to the shooting range by the time her nearest rivals started and she maintained that healthy margin before handing over to Pillage, who was equally assured as he brought GB home for the gold in front of a delighted home crowd.

Eliska Pribylova also shot brilliantly as she took the Czech Republic from fourth up to second, a position that experienced partner David Kindl consolidated with a strong running performance as they took silver ahead of Italy’s Irene Prampolini and Valerio Grasselli.