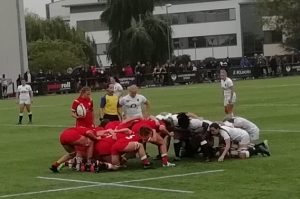 England had to work desperately hard to overcome a well-organized and accurate Canadian side that had seen off their USA opponents 24-7 in mid-week.

After the intense heat of Wednesday they were presented with the other side of English weather, cold, wet and miserable.

The only bright spot for the hosts early on was their superiority at the scrum. Just as a week ago, they were able to get the nudge-on to provide a platform for future success. But the visitors were having none of it. They dominated possession and territory for long periods of the first half. The young Red Roses were penned back near their line and had to defend vigorously.

It wasn’t till just before the break that they got their act together to produce a drive that gave them a scrum midfield on the Canadian 5-metre line. They may well have called for another drive, but no, the ball squirted out and Jodie Mallard set off on a curving run that took her right over the line. Lucie Skuse converted well. 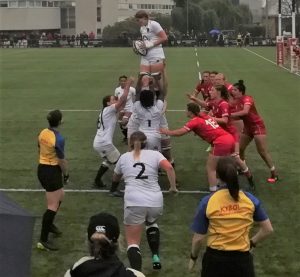 It’s hard to explain away this lead, so strong had been the Canadian showing. While the English marched back to the shelter of the Graham Dilley Pavilion, the Maple Leafs stayed out on the field. Was that wise?

Yes! In the third quarter of the game they dominated proceedings so firmly that they scored two fine tries by No 8 Emma Feldinger then the flanker Lizzie Gibson. One of them was converted by Shoshanah Seumanutafa who displayed al-round kicking skills of the highest order. 7-12. More possession led to a penalty right in front which Seumanutafa posted. 7-15

The penalty count against England was a worry. In this respect they mirrored their big sisters in the Elite side – innumerable offences given away, in attack as well as in defence. And after spotting one detail that the referee didn’t like – doing a double roll before releasing on the ground – why did they repeat it? They were lucky that these misdemeanours didn’t lead directly to further scores against.

It wasn’t till the last stages of the game that the forward power, evident near the start of play, began to take its effect. The driving mauls proved harder for the Canadians to halt. A fine line-out gave the hint of a chance and Ebony Jefferies was the player in possession over the line. 14-15

The experienced Hollie Cunningham was on the end of an extended move to nose the hosts into the lead once more. Jessica Thomas came on to provide England with a final try that gives the game a more one-sided look than it had at any stage of proceedings. 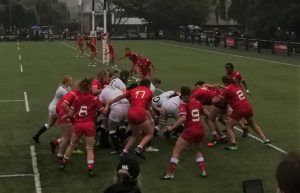 The Canadians gave a thoroughly good account of themselves. They had a wide range of skills that allowed them to overcome the conditions, above all, the wet ball.

It’s to England’s credit that they fought back so well after a long ineffective period in the second half. Perhaps Skuse might have put boot to ball more often, as she did so effectively in the first game. When she did hoof it deep into Canadian territory, it gained her side much needed momentum. Her place-kicking is very fine. Two of her failures from wide out hit the metalwork.

So England retain the Tri-Nations trophy that they gained in Canada last summer. There were ‘old heads’ on the field like Phoebe Murray, Hollie Cunningham and Amelia Harper to show the way to first-timers like Flo Long. Jo Yapp may well have provided England with yet more players capable of taking to the big stage.