A day of barely rivalled sporting excitement in Britain (Wimbledon finals, the British Grand Prix, a ridiculously palpitating World Cup cricket final) concluded with this battle of the Titans far away in Southern California. 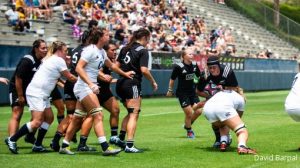 The game at the Torero Stadium San Diego ended in a 13-28 defeat for the Red Roses.  For the second top-2 clash running, the Black Ferns proved far too strong and sure in the second half. So they take the trophy and remain securely in top position in world rankings.

The difference this time was that England didn’t go into the half-time break ahead.

It was disturbing to see so many unforced errors creeping into the English game: multiple turnovers at the breakdown, off-sides, inaccurate passing and faulty options. Should we now be expecting a professional side to have put these shortcomings behind them? Obviously not.

So it was not to be a great double for England Rugby. The Sevens squad had performed miracles to win the European qualifying round in Kazan earlier in the day to qualify for the Tokyo Olympics. (Final: England 19 – Russia 0)

On the credit side Abbie Scott celebrated her 40th cap with another outstanding performance.

England started well in front of growing crowd of over 1000. They called a backs-move that allowed Claudia Macdonald (on the left-wing today) to sweep into the opposition 22. But as so often, the drive that followed didn’t produce the try that looked almost inevitable. We must wonder why this remained a problem right through the series to the end.

Amy Perrett awarded the Black Ferns a scrum to give them an immediate lift. But England restored their advantage when Leanne Riley took a quick tap penalty and ran straight into Toka Natua two metres away. She was carded. Emily Scarratt took the penalty. 3-0 But what if Riley had stepped past Natua, wouldn’t a try have been highly likely so close in?

The first of England’s mishaps happened in the fourth minute when a clearance kick by Zoe Harrison was charged down – not the first time this had happened to her on tour. A second occurred straight after: Riley bounce-passed to reach Poppy Cleall. New Zealand took immediate advantage, had two or three blasts at the line but, when offered a penalty, chose to go for goal. 3-3

Line-outs became a lottery for the English. After one overthrow Sarah Bern was able to make a short burst, but the basics of England’s game were being disrupted.

One of the few really fluent passages of combined play led to yet another try by Emily Scarratt. First the ball was spun menacingly out to Lydia Thompson (in itself a great rarity on this tour); it came back the other way for Scarratt to add another try to her collection. It was a mirror-image of the one she scored in the last encounter in New Zealand.

England’s leeway at half-time was only 5 points (10-15), but the Ferns produced a second-half performance that left the Roses quite unable to swing the balance. Scarratt did pot a second penalty to narrow the gap to 2 points, but that was as good as it got.

It goes without saying that there was huge endeavour. New Zealand drives were halted by brave and effective jackals. The collisions could be felt in the back row of the stand, but the Roses couldn’t mount another score.

When a tackle was missed in mid-field, Renee Wickliffe took advantage to cross the line near the posts. The remaining Black Fern points came from the boot of Cocksedge. All of England’s points came, almost inevitably, from Scarratt.

It was fitting that the game finished with the Fern’s pack massed over the English line. But the defence held out. Brave but ineffectual.