England Netball today (10.07.19) hosted a Parliamentary Netball Day, which saw MPs from Great Britain, Australia and New Zealand test their netball skills on a pop-up court at the Victoria Tower Gardens in London.

The event took place just two days before the start of the Vitality Netball World Cup, which runs from 12-21 July in Liverpool and is the third time in history that the highly anticipated tournament has been hosted in the UK. 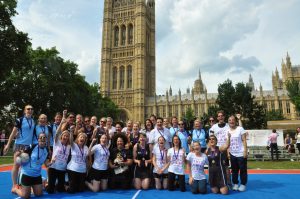 Working with the British MPs co-captains; Tracey Crouch MP and Caroline Dinenage MP, the day was set up as part of England Netball’s Biggest Summer of Netball campaign; a campaign designed to empower and inspire women and girls to get active and try their hand at netball.

Fran Connolly, England Netball’s Director of Development, said: “We were delighted to see so many MPs joining in the action at the Parliamentary Netball Day. We have been speaking to MPs for a while about doing something like this and now seemed like the perfect opportunity with the Vitality Netball World Cup just around the corner.

“We hope that the World Cup will inspire more women and girls to have a go at netball and get active, so that’s why we introduced our Biggest Summer of Netball campaign. MPs from Australia and New Zealand jumped at the invitation to take part in the Parliamentary Netball Day in the approach to the World Cup. It is brilliant to have their support and to see netball fever already sweeping the nation.”

The event saw Mims Davies, Minister for Sport open the festivities and take to the court with the British team proudly wearing ‘This Girl Can’ t-shirts (a campaign created to help women and girls get active).

She said: “I am proud to have been a part of this Parliamentary Netball Day, with our Australian counterparts pitting our skills against each other on a fantastic pop-up court, all against the stunning backdrop of the Houses of Parliament.

“We’ve done this to bring people together, enjoy some fun competition and encourage others to give it a go. And I hope that with England, Scotland and Northern Ireland involved, the Netball World Cup will inspire more women and girls to get into netball and get active.”

Sport England’s Kate Dale commented on the importance of the event and This Girl Can: “The This Girl Can campaign recognises that significantly less women are active compared to men. It was launched to help build women’s confidence and overcome the fear judgement that research showed was stopping many from being active.

“This Girl Can celebrates women getting active, and embraces the idea that regardless of shape, size and ability there is a sport or activity for everyone. We are therefore delighted that MPs and sports like netball are getting behind the campaign and encouraging more women and girls to give sport a go.”

The event was about bringing people together, enjoying some fun competition and encouraging others to give it a go, but with every competition there has to be a winner and this time the New Zealand team took home the trophy!

Tracey Crouch, the British team co-captain said: “My congratulations to New Zealand as they put out a brilliant performance, but what I am most proud of is that so many MPs of all different ages and experience levels came and gave it a go! Sport has the power to not only help us feel fitter and healthier but also to combat loneliness and form lifelong friendships. I urge everyone whatever your age, shape or ability level to give sport and activity a go!”

As part of the Biggest Summer of Netball campaign, England Netball is hoping to create the biggest netball open day ever on 22 July; the day after the Vitality Netball World Cup final. For anyone inspired to give it a go, dust off those trainers and check out the Session Finder on the England Netball website!