The University of Bath Rowing Club will be well represented when the world-famous Henley Royal Regatta gets under way on Wednesday.

The men’s eight start their Temple Challenge Cup campaign at 3.05pm when they face Purdue University from Indiana in the United States. 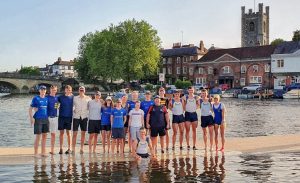 Crew Bath’s men’s coxed four also face American opposition in the first round of the Prince Albert Challenge Cup and will race against the United States Naval Academy at 7.40pm.

Macro has already enjoyed success on the legendary course this summer, having won lightweight women’s single scull gold at the Henley Women’s Regatta.

Both she and crew-mate Mulholland, as well as members of the men’s four and eight, are coached by Dan Harris on the GB Rowing Team World-Class Start programme at the University of Bath. Visit www.teambath.com/rowing to find out more.