Wasps Ladies are delighted to welcome LJ Adams and Buster White to the coaching team ahead of the 2019/20 Tyrrell’s Premier 15s season. Both bring a wealth of experience to the club, with over 20 years of coaching between them. 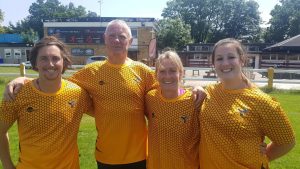 Speaking about the new arrivals to the coaching team, Director of Rugby Giselle Mather said; “We are absolutely delighted to add two such experienced and committed coaches to the Wasps Ladies coaching team. Both Buster and LJ will make a huge impact to our forwards, as well as to our game in general and help take our performance to the next level. Exciting times lie ahead!”

LJ Adams began working in the Premiership with Bristol Women in 2012, initially as a forwards coach before becoming head coach. She moved to Gloucester-Hartpury in 2017 with the formation of the Tyrrell’s Premier 15s, where she has worked alongside Suzie Appleby and former Welsh International Liza Burgess.

For the past four years she has also been nurturing young talent running the U18s girls’ rugby academy at Hartpury College. Alongside this she is completing her level four coaching qualification with the RFU. LJ is excited about the challenges and experiences that a new club holds.

Buster White will be a familiar name to the Wasps family, having spent 13 years playing in black and gold. He won two league titles either side of the game turning professional, having played alongside other famous backrowers like Lawrence Dallaglio and Dean Ryan. He made a name for himself as one of the most competitive players of his era.

Since retiring, alongside working with the RFU disciplinary committee, he has racked up coaching experience at four difference clubs, most recently at Twickenham Rugby Club as their forwards coach. We are excited to welcome the unique competitive experience that Buster will bring.