Brothers Cameron and Alistair Chalmers, University of Bath sporting scholars past and present respectively, struck gold within hours of each other at the England Athletics age-group trials to earn selection for next month’s European U23 and U20 Championships.

There was also a silver medal for Lauren Williams in Bedford, as well as bronze for fellow students Isobel Ives and Georgia Silcox, while Team Bath Athletics Club’s two medals included a brilliant gold for Tom Gale. 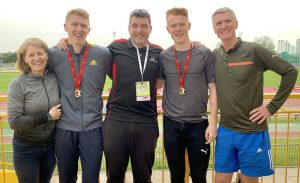 King Sporting Scholar Alistair, who has just completed the first year of a Sports Performance course, set a national age-group record of 50.58 as he won the U20 men’s 400m hurdles title for a third year running.

Older brother Cameron, who was supported by a Thompson Education Trust Scholarship while also studying Sports Performance from 2015 to 2018, then claimed the U23 men’s 400m title after clocking 46.34 in a highly-competitive race.

“It was always going to be a really good race, with a lot of guys running well,” said Cameron who, like his brother, is coached by James Hillier at the University’s Sports Training Village.

Management with Marketing student Williams, supported by a Santander Scholarship and coached at the University by Colin Bovell, ran a season’s best time of 59.13 as she finished U23 women’s 400m hurdles runner-up in her first year in the age group.

Civil Engineering Masters student Ives took women’s U23 800m bronze in 2:08.92 and Sport & Exercise Science student Silcox placed third in both the women’s U23 long jump and triple jump with clearances of 5.64 and 12.44 respectively.

Team Bath Athletics Club high jumper Gale, who is coached by Dennis Doyle at the University, earned an automatic European U23 qualification spot as he sailed clear at 2.25m, notching a season’s best mark in the process.

Visit www.teambath.com/athletics to find out more about student, club and high-performance athletics at the University of Bath.