Northampton Midsummer’s Day 2019 – At last some lovely weather to greet a buoyant England performance. They won the second of three T20s at Wantage Road by 42 runs. 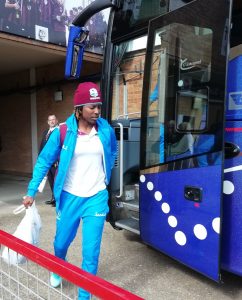 There was a Knight on each side, but it was England’s captain who wore the bigger smile as her side proved their adaptability to different formats of the game.
Danni Wyatt’s innings of 81 was the major ingredient in the hosts’ 180-6, a challenging but not unbeatable total. She was the one batter not to make her mark in the ODIs, and in the early stages of this knock she couldn’t consistently find the middle of her bat. But West Indian fielding hadn’t recovered from the untidiness it showed earlier in the tour. She rode her luck, surviving a number of chances that should have been accepted. The longer she stayed at the crease, the more her fluency rose. By the end she was clocking the ball all over the ground and thoroughly enjoying herself.

Amy Jones continued her fine form. This time she hit the first ball from Connell for four, not six. It was a shock when she indulged in a smear to mid-wicket and was castled for 37. The openers had set England on the road with 67.

Nat Sciver (31) and the skipper (22) added brisk runs, and the team’s all-round confidence saw them complete the innings at 9 runs per over.

Once more, neither Stafanie Taylor (19), the captain, nor Hayley Matthews (2) could provide their team with a large score. By the way Matthews will be joining Mignon du Preez and Sophie Devine in Loughborough Lightning’s Kia Super League squad this summer.

With Heather Knight forced to sit out this innings with a hamstring injury, Anya Shrubsole took over leadership and switched her bowlers around effectively. Linsey Smith showed why she was included in the squad with some demanding deliveries (2-22). She had Matthews caught at short third early on, and when Matthews was pinned lbw by Shrubsole (19-2), the West Indies were up against it.

Stacy-Ann King (43) and Chedean Nation (32) came riding to the rescue to provide the large crowd with the biggest challenge England have had to face thus far this summer. But the hosts’ fielding was on a different level (two run-outs) and Sarah Taylor offered another stumping so fast it defeated the human eye.
England’s out-cricket wasn’t perfect; catches were dropped and pick-ups fumbled. We have to hope that these rough edges are ironed out before they take on the Aussies at the start of next month.

There is tough competition for places in the side. Wyatt proved that the rewards can come if players are retained after less than convincing performances.
It was a credit to both sides that only 6 extras were recorded in the entire game
Scores:
England 180-6
West Indies 138-9