Caroline Buckland and Ziana Butt, England players for the Indoor Netball World Championships in South Africa, are looking for sponsorship – can you help them? Caroline plays for the senior England team while 16 year old Ziana has been picked for the U21s.

It is such an accolade to be picked to play sport for your country, but so often the trips are self-funded. 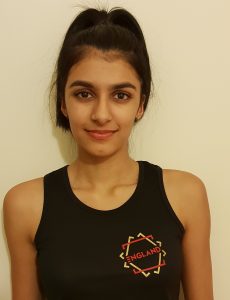 We recently posted an article about Natalie Miller who had been lucky enough to secure sponsorship from the Furniture Union which will enable her to travel to South Africa for the World Championships.

Earlier in the year we wrote an article promoting the cause of talented young athlete Ziana Butt who is working hard trying to find sponsorship but so far without success, because of her age Ziana is not yet working, her focus split between her schoolwork and netball. Ziana has a crowdfunding page which you can find here.

Ziana is still looking for £1,750 of the £2,000 total. Ziana would love to become the first British Asian Muslim professional netball player, and hopes to inspire others to follow their dreams.

Another player has now come to out attention Caroline Buckland, Caroline is Co-Captain of England’s Nets team, also hoping to travel to the World Championships in August.

Nets or ‘Indoor Netball’ is a variation on traditional netball, played with a high-tension net around the court so you can throw the ball off the sides and it never goes out of play. The game is a fast-paced, high-scoring and furiously competitive, and England are travelling to South Africa in August to defend their gold medal in the 7-a-side version of the game.

Alongside training every fortnight in Birmingham with the England squad, Caroline works full-time as a Marketing Manager at Chelsea Football Club. She is able to combine her love and passion for sport with her career, and her drive and determination on the court translates into the hard work and ambition in her business life too. It’s this competitive nature and desire to be the best that she attributes to her success within Nets. Caroline first toured with England in 2014 and again in 2016, and is looking forward to defending England’s gold medal in South Africa this summer.

Despite being governed by England Netball, Nets is not recognised as a professional sport in the UK, so participation in in the World Championships is entirely self-funded. Caroline (like Ziana) is currently relying on the support of friends and family to enable her to take up her position as Co-Captain of the England team.

Caroline is looking for sponsorship of £4,000 in order to lead the side to the tournament in South Africa, and can offer various media opportunities in return for the support. This would include, but not be limited to:

The above can be used as a guideline for what can be offered for full sponsorship. This can be tailored to meet your company’s requirements, for example utilising Caroline’s sporting network on LinkedIn to incorporate more written articles or advert posts on that platform from her profile (here) may benefit your business more than Instagram or Twitter use.

In summary Caroline says: “This is a sponsorship deal that will enable me to fulfil a sporting dream of being a captain for my country, and you have the opportunity to be a part of that. Supporting a female athlete in a world where women’s sport is notoriously under-represented reflects well on brand image and creates positive PR which can potentially result in incremental sales and growth in brand awareness.

“All Nets players are engaging in as much media coverage and exposure as they can in the lead up to the tournament, with interest from the BBC and ITV who have done interviews and articles in local press already. The opportunities to have your brand shown on social media channels will attract a lot of interest, and I’d be available to provide any quotes, references or write-ups for internal or external mail shots you’d plan on sending out to showcase your level of involvement.”

If you are interested in helping either athlete please email englandnets1@gmail.com