Skillzy, UEFA EURO 2020’s popular freestyle-loving mascot, was selected for stardom after an impromptu entry into a Europe-wide talent contest, it has been revealed in a light-hearted animation. 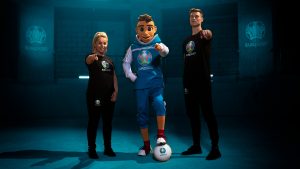 With exactly one year to go until the 60th anniversary of the European Championships gets under way, UEFA has released a cartoon-strip back story showing how Skillzy literally smashed his way to top billing in the fabled talent show.

The kids-focused animated film shows how a car park kickabout with his friends catapulted him to centre stage in a neighbouring audition after a tough freestyle trick went badly wrong – breaking a window and interrupting one of the talent show contestants.

Skillzy’s tricks and flicks when retrieving the ball impressed the awestruck judging panel – and the rest is history. He is then catapulted on a European Tour across the 12 host city venues, showcasing his skills in iconic locations from Baku to Bucharest, Bilbao to Budapest.

As well as celebrating the one year to go landmark for UEFA EURO 2020, the animated film also mirrors the talent competition theme at the heart of Your Move: a Europe-wide competition to find the most talented freestylers, street and panna footballers to become part of the EURO 2020 mascot team.

Each of the 12 host city venues will have freestyle representatives in the mascot team – giving fans across Europe a unique opportunity to represent their country and be part of the historic celebrations at high-profile events.

Fans have until July 1 to enter Your Move by uploading a video of their most impressive skills here. The entries will be judged by Liv Cooke, the 4x world freestyle record holder from England, and the former European Freestyle Champion, Tobias Becs, from Norway, and the winners will join the UEFA EURO 2020 Freestylers at the tournament.

Your Move is open to anyone over the age of 18 and living within the 12 countries staging final-tournament matches: Azerbaijan, Denmark, England, Germany, Hungary, Italy, Netherlands, Republic of Ireland, Romania, Russia, Scotland, Spain.