French Open semi-finalist Johanna Konta’s bid to become the first British woman since 1976 to win the title at Roland Garros is being helped by a former Team Bath Tennis coach. 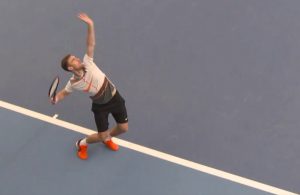 Konta has been in excellent form since then and is enjoying her best-ever clay court season, reaching two finals and dropping just one set so far en route to the last four at Roland Garros.

She recorded an outstanding 6-1 6-4 victory over former US Open champion Sloane Stephens in the quarter-finals today (Tuesday) and will now face either Marketa Vondrousova or Petra Martic in the last four on Thursday.

Smethurst is no stranger to the professional tennis circuit having played on the ITF and ATP Challenger Tour. He also played in the men’s singles at Wimbledon in 2014 before moving into coaching at Team Bath Tennis, where he worked with Fed Cup player Anna Smith and other pros in the International High Performance Academy.

Barry Scollo, Director of Tennis at Team Bath, said: “It’s no surprise that someone of Dan’s calibre has gone on to work with Johanna Konta, it was an absolute pleasure having him as part of our coaching team for the past two years.

“Dan brought so much to the tennis programme as both a player and a person, it’s been great to see him develop, progress and be doing so well in his new role.”

Team Bath’s Marcus Daniell, who is coached by David Sammel, has also been in action at the French Open in the men’s doubles.

He and partner Wesley Koolhof won their opening match 6-3 6-2 against Hubert Hurkacz and Aljaz Bedene before giving Number 1 seeds Marcelo Melo and Lukasz Kubot a mighty scare in the second round, eventually being edged out 4-6 6-2 6-4.

Daniell and Koolhof have now turned their attention to the grass court season and are playing in the Surbiton Trophy this week.

Team Bath Tennis is the LTA Regional Player Development Centre (RPDC) for the South West and caters for players of all ages and ability, from tots to touring professionals.

The eight indoor courts and ten outdoor courts – four hard, four artificial clay and two American clay – at the Sports Training Village, plus other facilities at associated hub clubs, are used by more than 1,500 people of all ages and abilities every week. Visit www.teambath.com/tennis to find out more.