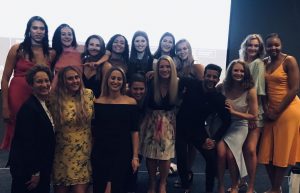 The Australian shooter received 22% of the vote for the coveted Fans’ Player of the Year Award, holding off strong competition from Imogen Allison and Sophie Drakeford-Lewis.

She also claimed the Coaches’ Player and Players’ Player of the Year Awards, while attacking partner Drakeford-Lewis received the Endeavour Award in recognition of her tireless on-court performances.

Kirsty Harris was named as the U21 Players’ Player of the Year, while Hannah Passmore and Anya LeMonnier shared the Coaches’ Player honour.

LeMonnier, who moved from Jersey to Bath at the age of 14 to pursue her netball career with the Blue & Gold, was also shortlisted for the Team Bath Club Member of the Year Award which went to Pippa Baldrey, a volunteer video analyst who dedicates a huge amount of time to analysing both Team Bath and the opposition during match preparation.

There was also an emotional tribute and presentation to Jess Thirlby, who is leaving Team Bath after 20 years of outstanding service as both player and coach.

The awards night, which took place at the Apex City of Bath Hotel, was preceded by an end-of-season celebration at the University of Bath Sports Training Village where more than 100 fans of all ages got to join Team Bath’s Superleague stars on court.

Younger supporters got to learn from their favourite players during fun coaching sessions, while older fans took part in a walking netball session with coach Thirlby and several Blue & Gold stars. There was also a cake sale, raffle, shoot-out and crazy catch challenge. 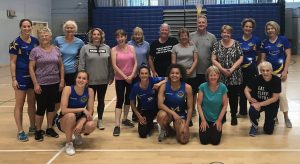 Team Bath Netball will be running off-season and pre-season fitness sessions during the summer, as well school holiday camps for youngsters from U11 to U16. Visit netball.teambath.com/summer to find out more.