What fascinating decisions Anna Richards had to make in putting together this fourth Barbarian squad. For the first time they are right up against it, fronting up against the second-ranked nation in the world and the only one to be fully professional.

Yes, she had the entire globe to choose from and she could pick any number of starry names, but availability was one thing and suitability another. 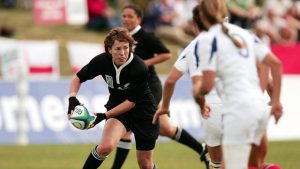 The combination she selected for the previous bout against the USA came through with a one-point win in a tense and exciting match (34-33). If the same outfit reappeared at Twickenham, what chance would it have against a Red Roses squad going all-out to impress their management? They have the momentous Super Series coming at the end of June, where some of the contracted players are more than likely to be left at home. Then the all-important day at the turn of the year when decisions have to be made about next year’s contracts. So it will be no-holds barred for the hosts.

Richards has put together a team dripping with talent and experience. Imagine playing against people who have won the World Cup not once, but three and four times; and against two players with well over 100 caps each, including the most-capped player ever to grace the field.

Any weaknesses? Well, how about an average age of 35.6 in the forwards? However distinguished they are, will they be able to hold their own against a Roses pack which can contain only two players over the age of 30, whoever Simon Middleton decides to include? They may manage to heave the opposition back in the tight, but when that happened to England during the recent season, it had no lasting effect on their penetration.

You have to fear for their well-being in the last quarter if they haven’t already put 40 or 50 points on the board.

The eight English names posted to wear the famous black-and-white hoops aren’t there just because of logistical convenience. For one thing, they will be more familiar with the style of play the hosts will produce and Twickers won’t be such a daunting experience for them as for others less familiar with its aura. It will be wonderful to see Nolli Waterman proving once again that she had little need to retire when she did. It will be a second fitting send-off for Georgie Gulliver after her triumphant swansong in the Tyrrells final last month. It will be good seeing Laura Keates back in action at representative level after her long injury break. She will want to put a marker down.

Two Welsh and three Irish players complete the British Isles input. Will Elinor Snowsill allow us to see her heel-kick again? It would be worth the entry fee on its own.

And those two coaches – they could scarcely be more distinguished. Anna Richards herself won four World Cups. Lisa Burgess, her assistant, won 6 caps for Great Britain then 93 caps for Wales. Both have a long and admirable record in coaching.

This fourth Barbarian appearance will be the biggest and most momentous of its infant career.