Olivia Hancock, the 13-year-old equality campaigner from England, steals the show with rousing speech at Haus of #WePlayStrong panel event ahead of the UEFA Women’s Champions League Final. 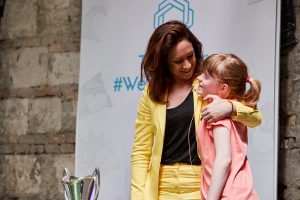 A 13-year-old girl who has overcome bullying and physical abuse to become one of the leading advocates for young female footballers wowed a VIP audience with an impassioned keynote address ahead of today’s UEFA Women’s Champions League Final in Budapest.

Olivia Hancock, from England, was the star of a pre-game panel talk hosted by #WePlayStrong, rallying the crowd with an emotive message to continue the collective fight for equality in women’s football, and echoed the sentiments of UEFA’s Women’s Football strategy by declaring: “it’s time for action”. 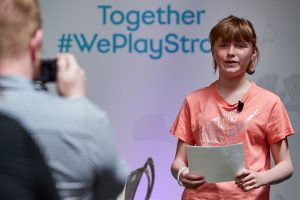 The audience – headed by UEFA Head of Women’s Football, Nadine Kessler, and including professional footballers such as Nadia Nadine, Petronella Ekroth, Laura Feiersinger and Sarah Zadrazil, and pop star Chelcee Grimes – listened intently as Olivia discussed the obstacles to acceptance as a young girl with a love for football, including being punched by a boy and being called derogatory names in the playground.

Undeterred, she is now an advocate and ambassador with a growing following of fans inspired by, in her own words, “a young person making a small difference”.

The event was attended by some of football’s most influential figures and took place ahead of the UEFA Women’s Champions League Final at the Groupama Arena.

This is the first year that the final has been played in a different city from the men’s and with the FIFA Women’s World Cup weeks away Olivia described 2019 as “the most important year for women’s football so far”.

She said: “Today, anything and everything is possible. We are making progress and we are playing strong, together. We know where we want the journey to take us and we know how to get there.”

Olivia has had to overcome emotional barriers to play football in her home country, being attacked by both players and parents on the sidelines. Rather than be beaten by the experience she has used it to help push for change, leading a campaign to ensure that all girls are given the choice to play football while at primary school.

Her campaign and attitude has earned her the respect and support of politicians, celebrities and female footballers.

“It’s important for the future of the women’s game that all primary schools have girls’ football teams like they do boys’ teams,” said Olivia. “That schools can provide an environment where girls can enjoy the fun of playing football together at a young age. I am doing what I can to make these changes and I know UEFA is too.”

Through the Together #WePlayStrong campaign, UEFA aims to make football more culturally relevant and aspirational for girls in their teenage years, where they traditionally drop out in large numbers. Olivia spoke as UEFA’s Head of Women’s Football, Nadine Kessler, announced their new strategy #TimeForAction, calling for direct, concrete action that will grow the women’s game.

“As a 13-year-old girl, I am so excited about the future of the women’s game,” Olivia told the audience. “A game that can have a future for me and girls like me across Europe and the world.

“But we have to continue to keep growing. To move forward. To remember what brings us here tonight. And what will keep us together tomorrow.”

Olivia’s speech comes at a time when financial investment in the women’s game has never been greater and where media coverage has increased. UEFA are now working towards doubling the number of female players in Europe as well as increasing diversity and female representation in all UEFA bodies.

Among some of the subjects discussed during the panel talk were how the game is prospering for current professional players and the future landscape for aspiring ones; how traditional and new media are adapting to the rise of women’s football; and how the marketing of women’s football is attracting new sponsorship opportunities.

Nadine Kessler, UEFA Head of Women’s Football: “It was really emotional listening to Olivia share her story with the audience. It was a powerful message from an inspiring young girl. She has overcome the kind of adversity nobody should face and is now a shining light for any girl who wants the opportunity to play football.”