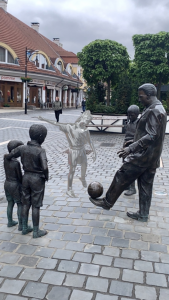 The UEFA Women’s Football campaign, #WePlayStrong, has used Augmented Reality technology to make a bold statement ahead of today’s Women’s Champions League Final in Budapest – by putting a teenage girl at the centre of the city’s most famous football landmark.

The Ferenc Puskás statue in Obuda is popular haunt for football fans and tourists alike, the legendary Hungarian striker carved out in bronze playing keepy-uppy in front of three adoring school boys.

To celebrate the occasion, UEFA has utilised the latest technology to update the Puskás scene and put Csilla – a popular Hungarian girls’ name which translates as star – at the heart of the action. The purpose is to raise awareness of the Women’s Champions League final but also to celebrate this week’s launch of the UEFA Women’s Football strategy, #TimeForAction.

The AR footage was posted on the official #WePlayStrong Instagram account and has won the acclaim of a host of high-profile footballers and influencers alike.

Puskás is still regarded as one of the greatest male footballers of all time. He scored 84 goals in 85 games for Hungary and 514 goals in 529 matches for his native Honved and Real Madrid, with whom he won three European Cups and a Ballon d’Or. 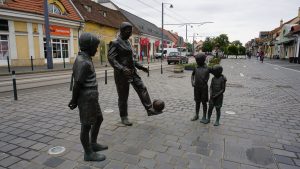 The social media stunt is part of UEFA’s build-up to the Women’s Champions League Final.

Aguska Mnich, of Poland, added the inaugural European Freestyle Football Championship to her world title collection after an impressive win against Laura Dekker of Netherlands.

Roman Putsch, UEFA Head of Marketing Activities: “Ferenc Puskás is one of the greatest names in the history of world football and is revered in his homeland. We noticed the statue in his honour had something missing – a girl. Adding our Augmented Reality creation, Csilla, to the three young boys in the scene not only made a statement for women’s football on the eve of the UEFA Women’s Champions League final but is also in keeping with our philosophy for our UEFA Women’s Football strategy, #TimeForAction.”