Olivia Green took gold and Kerenza Bryson silver on another brilliant 2019 day for Pentathlon GB athletes on Saturday (11th May), this time at the Czech Open Championships. Behind the leading British duo, Holly Parker finished an impressive 4th having only been called up to the squad on Thursday with full modern pentathlon international debutant Georgina Mitchell coming home 7th in Prague. The final member of the women’s team, Lancashire’s Georgia Hannam, finished 18th with a fall in the ride the only thing that stopped her joining her teammates in the top 8.

The British flag was a prominent sight towards the top of the leaderboard throughout the day as all five athletes impressed. Green and Bryson’s places on the podium also made it two straight years that PGB women have enjoyed a double medal haul at the event with Zoe Davison and Charlie Follett matching the feat 12 months ago. The result also continued a fine 2019 for Green which has already seen the teenager claim bronze at the Swiss Women International and record a 5th place in the World Cup 3 mixed relay last weekend. 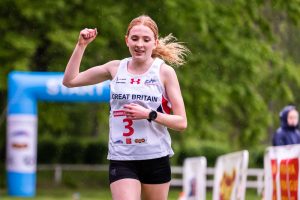 The competition began in the pool where all five Brits made quick starts to the day. It was 20-year-old Hannam who led the way in 2:15.50 with fellow University of Bath student Green just behind in 2:16.86. There were also sub 140-second times for Mitchell (2:17.13) and Parker (2:18.06) with Bryson stopping the clock in 2:21.39 on her first international appearance since March.

It was Plymouth’s Bryson who led the way in the fencing hall, finishing with 18 victories and just 9 defeats from her 27 bouts. Another encouraging discipline for the Brits saw Green, Parker and Mitchell all finish one hit further back (17V 10D) with Hannam also recording a positive fence as she ended with 15 victories to her name. That left the Pentathlon GB quintet all inside the top 10 after the opening two disciplines and well placed for strong finishes.

It was Hannam who lost out in the ride, a fall at the first part of the triple seeing her incur a raft of time penalties whilst she remounted. To the 20-year-old’s credit, she did just that and completed the course, but could only score 191 for her round. On a tight and technical course, the other Brits performed admirably, Bryson winning the discipline with a score of 298 points whilst Green, Parker and Mitchell all just rolled a single pole to score 293 for their rounds.

As others faltered, that left four Brits in the top five heading into the laser run with Bryson (2nd), Green (3rd), Mitchell (4th) and Parker (5th) whilst Hannam dropped to 21st.

It was to be Saddleworth’s Green who grabbed the initiative though, a rapid run-shoot seeing the TASS supported athlete take victory ahead of Bryson. It was Germany’s Pia Bukow who stopped a British clean sweep on the podium as she edged Somerset’s Parker into 4th whilst Mitchell came home 7th to cap a fine debut at Junior and Senior level. A strong laser run from Hannam saw her pick up three places in the final discipline as she crossed the line 18th.