England Netball has today revealed that it is aiming to create the biggest netball session ever, the day after the Vitality Netball World Cup final. 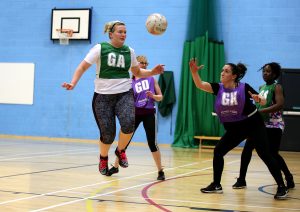 Players in action during the Back to Netball session held at Sir Frederic Osborn School, Welwyn Garden City

Following the success of the Vitality Roses, England’s senior team, at the Commonwealth Games in April 2018, England Netball saw more than 130,700 women start playing netball or more netball in the UK as a result of the gold medal.

With the Vitality Netball World Cup due to take place from 12-21 July in Liverpool, the National Governing Body is anticipating that this will be the ‘Biggest Summer of Netball’ in England’s history and predicts another spike in participation and popularity for the sport following the highly anticipated tournament.

To help grow the sport at a grassroots level, England Netball is asking leisure centres, venue owners, schools, colleges and anyone with access to a netball court, to open their courts up to the public for free for just one day on 22 July, giving anyone inspired by the Vitality Netball World Cup the chance to have a go at netball. 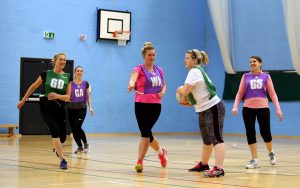 Players in action during the Back to Netball session held at Sir Frederic Osborn School, Welwyn Garden City

Chief Executive of England Netball, Joanna Adams, said: “This initiative has been developed as part of our new ‘Biggest Summer of Netball’ campaign, which aims to encourage people to get active and participate in this wonderful sport at a grassroots level, throughout the summer months.

“Our Vitality Roses inspired thousands of people to take to the netball courts after their success at the Commonwealth Games and with the Vitality Netball World Cup due to take place on home soil, we envisage interest will be bigger than ever before and we want to be prepared.

“To achieve our goal of creating the biggest open netball session in history, we want to try and make every school, gym, sports hall and outdoor court available throughout the UK the day after the final so people can just rock up and have a go.

“We need venue owners to help us in truly making this the ‘Biggest Summer of Netball’ ever and to share in the success and popularity of the Vitality Netball World Cup this year. All we ask is that venues pledge their courts to us for just one day so that netball can sweep the nation!”

England Netball will provide each venue that signs up with a netball coach to run the free session on 22 July.

Venues can pledge their court for this initiative by registering their details here:  https://www.surveymonkey.co.uk/r/PledgeYourCourt

The venues that sign up to take part will be listed on the England Netball website during the Vitality Netball World Cup so that members of the public can find their closest on 22 July.