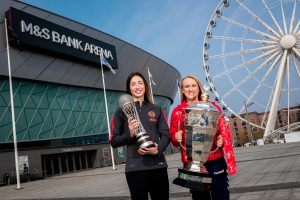 This unique agreement will see the two respective tournaments cooperate and share knowledge on a regular basis. The collaborative agreement will cover everything from operational matters, volunteer strategy, recruitment, legacy initiatives, marketing, the customer journey and womenŌĆÖs sport ŌĆō all with a wider aim of working together to learn from and support each other.

The Vitality Netball World Cup 2019 will take place in Liverpool in July, with 60 matches taking place over a 10-day period. RLWC2021 will come to England in two years’ time with 21 venues across the country ŌĆō including Liverpool – hosting games across the menŌĆÖs, womenŌĆÖs and wheelchair tournaments, which will take place at the same time.

Jon Dutton, Chief Executive of the RLWC2021, commented: ŌĆ£Since we started work on our project back in 2015, we have proactively met with a number of events to improve our knowledge and learn as much as possible, something I passionately believe in.

ŌĆ£We are delighted to formalise a MOU and to be working alongside the Vitality Netball World Cup 2019 team, who I am sure will deliver a world-class tournament this summer. WeŌĆÖve already received some brilliant insight from their team, and we hope that some of our support can help them achieve their goals.ŌĆØ

Lindsay Impett, Event Director of the VNWC2019 said: ŌĆ£IŌĆÖm thrilled that these two prestigious sports events are coming together in partnership to share insight so we can help each other achieve our event visions. By working closely together weŌĆÖll be building on our learnings and sharing knowledge, hopefully taking our respective sports from strength to strength.ŌĆØ

The Law Amendments ŌĆō What happens next?.

Yes, there are lots of fascinating possibilities available to Middleton. The trouble is, the crunch game comes first up. He must pick the side he can trust to produce the goods. In her latest pod Rachael Burford said the No 15 must be safe under the high ball, hence Sarah McKenna. IŌĆÖve seen both Dow and Attwood fail in this respect this season. Wing is a major source of strength with Thompson, Breach, Smith and Dow. Hard to leave out a player who scored 2 unforgettable tries in a world cup final against the worldŌĆÖs best, and played Woodman off the park in Rotorua. Sad thing is: wingers rarely figure on the bench. If they can offer a second option (full-back) they have a chance. That means Dow. A concern is No 7. I think the management prefer specialist flankers. Once Marlie Packer is counted out, that leaves only Vicky Fleetwood with the necessary pace and know-how on the open-side. Of the ones you mention, Cokayne fits the bill excellently. But sheŌĆÖs 1st-choice hooker. Has Kerr ever played back-row? Beckett was only filling in in the second row, surely. Yes, lots of talent waiting in the wings. Makes you wonder whoŌĆÖll retain their contracts next year. Harriet Millar-Mills was invited in to join the test squad recently.

Huge apologies for the delay in getting back to you, IŌĆÖve just phoned Dartford FC and the match will be pay on the day, it would appear that you canŌĆÖt get advance tickets. Sorry it has taken so long.