On Sunday they capped their amazing season by beating Orrell St James to win the Challenge Cup at their first attempt.

The Saints put in a might shift but the Lionesses roared to success.

It took just 4 minutes for the Lionesses to cross the whitewash when Mia Clarke collected a clever cross-field kick to touch down. Player of the Match, Grace Cotton made the conversion.

Shortly afterwards Jess Crockford finished off a slick passing move to dot down in the corner (conversion missed). 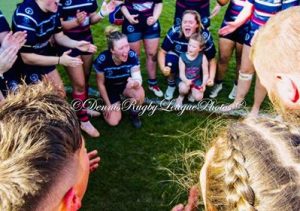 Before half time Orrell lost two of their players to injury, Elise Wright (stretchered off) and Leah Porter.

No such bad luck for Featherstone as Cotton scored a try of her own taking the score to 14-0 at the break.

With no intention of going quietly, Saints got the second half off to a flier as Chloe Hammond muscled her way through and over the line and Claire Mullaney converted – 14-6.

Hope was to be short-lived, however, as Lionesses’ defence stepped up a gear and successfully restricted Saints to the one score. 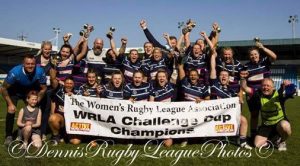 In the last quarter Featherstone scored three more times, Cotton adding her second and then Paige Stevens scoring two of her own making the final score 30-6.

What a way to end their first season – huge congratulations to Featherstone, commiserations to Orrell St James and we wish Elise Wright and Leah Porter speedy recovery.