It was a mixed Easter weekend for Team Bath Netball, who recorded an excellent derby victory over Severn Stars but missed a first chance to secure a Vitality Superleague semi-final spot when they were edged out in a close contest against top-four rivals Saracens Mavericks.

A busy 48 hours, which saw all ten Superleague teams play on both Saturday and Sunday, ended with the Sitec-sponsored Blue & Gold still sitting third in the table with just two games of the regular season to go. 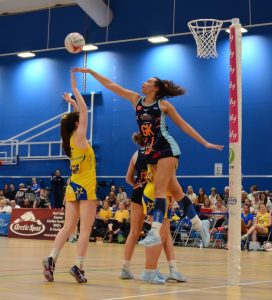 The netball Bank Holiday bonanza began with Team Bath making the short journey to the University of Gloucester Arena to face a Stars side full of confidence after an away win over league leaders Manchester Thunder, their third successive victory since losing by ten goals at the Team Bath Arena in March.

However, it was the buoyant Blue & Gold who quickly took control of proceedings as an excellent first-quarter performance saw them open up a 17-12 advantage.

They continued to dominate during the second quarter, stretching their lead to 34-22 to half-time, before superb defensive pressure right across the court restricted Stars to just five goals in the third period as Team Bath went 46-27 clear.

With the following day’s game against Mavericks in mind, the visitors took the opportunity to give all 12 of their players a run-out and Stars were able to close the gap but only to 53-42 as Team Bath registered an important victory.

The only negative was an injury to wing-attack Rachel Shaw, which meant she had to sit out the televised Easter Sunday showdown at Coventry’s Ricoh Arena against a Mavericks side who – following Loughborough Lightning’s victory over Thunder – knew they had to win to maintain any realistic chance of reaching the semi-finals.

A fast, physical and competitive match saw Team Bath, with Mia Ritchie replacing Shaw at WA, open up a 12-8 lead in the closing stages of the first quarter, only for Mavericks to draw level going into the break.

It remained nip and tuck during the second period but Mavericks managed to edge into a 24-22 lead at half-time and the gap stayed at two during an absorbing third quarter.

Team Bath continued to battle during the final 15 minutes but Mavericks clinically took advantage of a couple of errors to gain some breathing space and went on to record a 51-45 victory.

That moves them back to within three points of the Blue & Gold and fourth-placed Lightning, both of whom are in turn just three points behind Thunder – Team Bath’s hosts in their penultimate match on Saturday (April 27, 5pm).

After the Mavericks game, Team Bath Netball Head Coach Jess Thirlby said: “It is small margins in this top five so it is an opportunity lost but we’ve got two more matches left to play.

“We had the opportunities, particularly early on, to stamp a bit of authority on the game and we didn’t which allowed Mavericks to grow in confidence.

“It was very even throughout and the kind of game we were expecting. I think Mavs are fantastic defensively, they close down space really well particularly inside the circle and I think we were left wanting a little bit.

“There were moments in the game where I thought we were very good but ultimately both teams spilled a lot of ball and we ultimately didn’t capitalise enough on Mavs’ errors.

“We’ve got to find a way to close out games like this. The error count is still too high and it’s costing us. We know that and we’re working on it but we’ve got two matches left and it’s time to put it out there now.”

After the trip to Manchester, Team Bath wrap up the regular season with a potentially decisive home match against Superleague newcomers London Pulse on Saturday, May 4 (6pm centre-pass). Tickets are selling fast for the big match and can be purchased at netball.teambath.com or by calling 0844 888 4412.