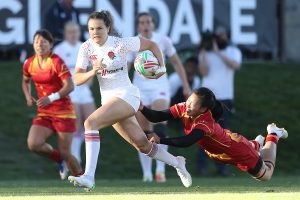 After missing Sydney and Hamilton earlier this season through injury, Ellie Kildunne will make her return in Japan this weekend.

Having progressed through the England Women pathway to earn a contract with England Sevens at the start of the 2018/19 season, Emma Hardy is selected to represent England in her first World Series tournament in Kitakyushu.

Captain Abbie Brown will lead the side as they face USA, Ireland and Fiji in Pool C in the group stage of the competition on day one.

Commenting on selection Bailey said: “It’s great to have Ellie Kildunne back in the squad for this tournament; she is a really important player for us who has worked really hard rehabbing.

“Additionally, we’re excited for Emma Hardy who has performed well in training to earn her first World Series selection.”

Held at the Mikuni World Stadium, Kitakyushu is the fourth round of the 2019 HSBC World Rugby Women’s Sevens Series.

Bailey added: “The period of time since our last World Series tournament at the end of January has been invaluable to us as a squad.

“With there being some changes to the team in recent months this time has allowed us to train with a consistent group of players and really focus on ourselves and the talented group that we have.

“We had a great training tournament in France last month which has given the squad great confidence and renewed energy going into these weeks leading into Japan where we will face a very competitive pool.”

Claire Allan, Heather Fisher and Deborah Fleming were all unavailable for selection due to injury.