‘100 Days, 100 Girls, 100 Goals’ was the theme of the 100 days to go event at Salford’s MediaCity this morning, as international netball stars and over 100 school pupils gathered to kick off the official countdown ahead of the Vitality Netball World Cup 2019. 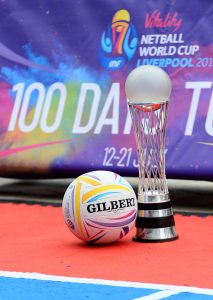 As the Vitality Netball World Cup 2019 trophy was brought to Salford, over 100 pupils from Loreto Grammar School, Manchester High School for Girls, St Bede’s College, and St Patrick’s RC High School gathered on the MediaCity Piazza, Salford, where a pop-up court was erected and netball activities were held.

The Vitality Netball World Cup 2019 will celebrate the sport’s elite players and how it empowers women and girls throughout the world. At the 100 days countdown event the 100 girls, along with the netball stars and TV presenters shared their life goals, which will be showcased at the World Cup event this July. 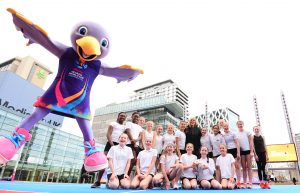 Event Director Lindsay Impett said: “It’s fantastic to see such a huge buzz around our 100 days to go milestone event as we count down towards the World Cup tournament. With so many young girls and netball stars involved in sharing their goals it just shows how empowering and positive this sport is for women and girls everywhere. We’re really looking forward to welcoming the world to Liverpool this July.”

England Netball Head Coach Tracey Neville added: “The passion of these young netballers is so great to see! With 100 days to go now the excitement is really starting to build ahead of this July, and speaking to Claire [Maxwell] and Dan [Ryan] I know our fellow Home Nations are raring to go too.”

The full competition schedule can be viewed here.

Courtesy of the Vitality Netball World Cup 2019 via Conker Communications