Wasps overcame a tough Bristol Bears side to finish the regular season with a 25-17 victory. In front of a large crowd at the annual Big Swarm event, the home side scored four tries, including a double from Abby Dow. However, it was their incredible defensive effort, which was tested throughout, that secured the win. 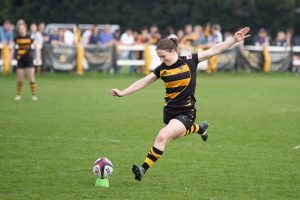 In a game littered with penalties from both sides, it was the boot of Lizzie Goulden which got the home side off the mark with an early penalty. Bristol spent large periods with possession early on but Wasps continued to win the collisions and important penalties at the breakdown to relieve pressure.

The first try of the game came from scrum-half Claudia Macdonald, who stole the ball off the back of an overthrown lineout. She then demonstrated her lightning speed as she raced past defenders for 80m, scoring her tenth try of the season.

Wasps scored another well-worked try on the half hour mark, as they attacked the blindside. Sarah Mitchelson carried into contact before throwing a fantastic offload to Abby Dow, who turned on the afterburners to win the race down the touchline to score.

The visitors hit back immediately with a try from Clara Nielson, with Wasps leading 15-5 at the break.

Lizzie Goulden extended Wasps lead after seven minutes of the second half with another penalty, but England international, Sarah Bern, crossed for the visitors second try not long after.

Bristol controlled possession for large period of the second half, as they began to increase the tempo to try and break down the Wasps defence. However, the home side demonstrated their commitment and fitness to keep Bristol from taking the lead. A number of try saving tackles coming in to stop the threatening Bears attack. 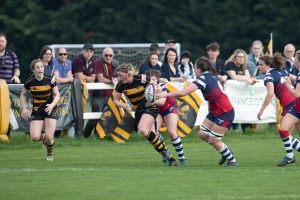 Just five minutes from the final whistle, Wasps made the game safe with an excellent flowing move from their backline. The ball eventually finding Abby Dow on the near side, who was able to win the race to the line and dot down.

Bristol got the last score of the day from Flo Long, but with time up on the clock Wasps ended their season at Twyford Avenue with a 25-17 victory.

Wasps had to absorb a lot of pressure against a very determined Bristol Bears side. The hosts demonstrated their clinical nature, making the most of their opportunities, whether from the boot of Lizzie Goulden, or scoring some scintillating tries. However, it was their defence which was most important, and will please the coaching team to see that it withstood a heavy barrage in the second half to secure the win.

The result means Wasps finish the season comfortably in fourth position in the Premier 15s this year, and will now face Saracens in the semi-finals at Allianz Park in two weeks’ time.