Speaking at the launch of this year’s BT Sport Pub Cup Rachel Brown-Finnis and Fara Williams expressed their excitement at being involved in this exciting competition particularly since this is the first time women’s teams have been invited to sign up. 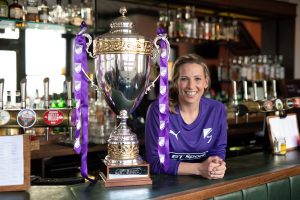 Rachel Brown-Finnis before retiring played in goal for both Liverpool and Everton as well as US college teams Alabama Crimson Tide and Pittsburgh Panthers. She also played for England and competed for Team GB at the Olympics in 2012.

Fara Williams plays her football at Reading FC, and has also played at Liverpool, Everton and Arsenal she is also an England player and like Rachel competed for Team GB in the 2012 Olympics.

Rachel and Fara have both worked with BT Sport in the past and were delighted to be invited to be involved with BT Sport on this project. Rachel told me she was particularly pleased to see women who have perhaps played football but given up the sport, alongside women who have never even kicked a ball being given the opportunity to play in their local pub’s team.  An added incentive, and something that will make having a team more possible, is that BT Sport are donating an entire team Puma kit to each team that signs up for the competition.  It is hoped to get 32 women’s teams from across the country. 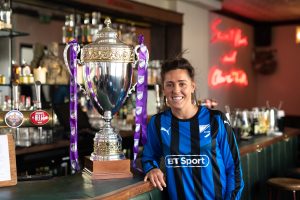 Rachel believes as well as the benefits from playing the sport, improving fitness, and learning new skills, the social side of being a team member and the camaraderie are all benefits of joining in.

In the early stages of the competition the games will be played as 5-a-side with squads of 7 players but for the semi-final and final teams will be 11-a-side.

On reaching the semi-final Rachel and Fara will become involved with the management of the teams and for the final they will take a team each. This is where  their competitive nature shone through, as both expressed a desire to come out on top as the winning manager – having played together for England and Everton this competition will pit them against each other and Fara believes she has the edge. However, she may not know that Rachel has already coached a school team through to the Schools’ FA Cup Final.

Although the BT Sport Pub Cup will return for its third year, with this year’s tournament set to be the largest yet, it is the first year women’s teams will have competed.

Following the success of last year’s competition, which was won by East London pub, The Gun, in thrilling fashion, the 2019 BT Sport Pub Cup will be open to more teams than ever before, with over 190 places up for grabs across a men’s and a women’s tournament. 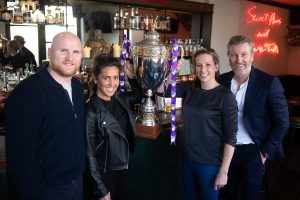 The free-to-enter competition, which aims to celebrate pubs and their football teams, begins on the 8th May with twelve regional qualifiers at stadiums across the UK, including Anfield – Liverpool, Selhurst Park – Crystal Palace, St. Marys – Southampton, Molineux – Wolverhampton, Stadium of Light – Sunderland , Liberty Stadium – Swansea and Windsor Park – Belfast, before the winning teams face off in the semi-finals at the state-of-the-art City Academy, home of Manchester City and with the final at Newcastle’s St. James’ Park on 4th June.

Bruce Cuthbert, director commercial customers, BT Sport, said: “This year we’re bringing back the BT Sport Pub Cup, bigger and better, with more teams able to take part and the biggest pub team kit giveaway ever.  Sport is such an important part of pub culture and this competition aims to strengthen the tie between licensees and their communities by offering a once in a life time experience to pub football teams up and down the country.”

Robbie Savage, manager of last year’s winners, The Gun, said of the 2018 competition: “It’s been very professional, very organised and a fantastic initiative to give these guys the opportunities to play at some fantastic venues.”

John Hartson, who managed last year’s finalists, the Liver Vaults said: “The Pub Cup is a great advert for all the pubs across the country and fair play to BT Sport for putting something like this on.”

Please note Pubs can only enter one team either male or female not both.  The landlord or the team can enter (the landlord’s name, pub name and postcode must be provided to validate an entry)

To enter your team in the BT Sport Pub Cup go to www.btsportbusiness.com/pubcup . Entries close on Sunday 31st March