The two games that were completed on Sunday 17th March both had a significance way beyond the outcome of this year’s championship. But first, the games themselves:

Italy’s head coach, Andrea Di Giandomenico, was one of very few people who rated the French side the most complete team around, the toughest but also the most stimulating. They would provide the hardest match of the tournament.

This may have been a typical piece of managerial talking-up, but he obviously put quite other ideas into his players’ heads.

Now they have seen off France in Padua in Round 5, they have completed a decisive year. Finishing second is the fulfilment of a long-cherished dream. 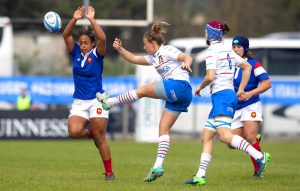 This is such a necessary advance both in the 6N and in women’s rugby in general. The big chiefs have held sway for far too long. Here is a major nation – in terms of population – coming of age in this still developing field.

They put a foot in the door with that first-ever win over Ireland, but the next two results – the failure to put Wales away (3-3) and the drubbing they took at Sandy Park, raised the doubts again. But they took France for what they were, a side desperately short of the great players who have brought them nearly to the top of the global tree. Quite apart from the missing 7s squad, in Padua they were shorn of N’Diaye, Corson, Argagnon (all injured) and Romane Ménager (red carded).

The game began with traditional roles reversed, Italy driving and reclaiming just as their opponents had expected to. Their pack had few problems at the set scrum, and they turned the tables at the line-out by exploiting French fallibilities. It was only the captain Hermet, now wearing No 8, who kept her side in the game in this department. 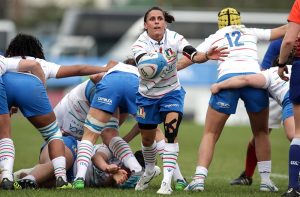 A line-out steal led to an early try for the Azzurre, rapturously greeted.

Five minutes before the pause for breath the French got their passes working, finally moving the ball out to Boujard on the right touchline. She took her chance well. But her good work was undone when a colleague moved carelessly offside in front of her posts. Sillari did the necessary, reaching 23 points for the tournament and more to come.

Italy were straight back on attack after the interval, making telling breaks and off-loads taking them close. More joy when a defensive scrum was disrupted and Cox awarded them a 5-metre penalty. Sillari’s second kick gave them a 6-point lead.

Until now Bourdon had been unable to put her mark on the game, but as she was switched to No 9, France’s work-rate increased. Even so, it was Italy who were looking more and more like a proper rugby team, working through the phases with a variety of plays. Confidence was surging through their veins. Pity the poor coach, though. Di Giandomenico was prowling far upstairs, watching on with an air of concern that belied his team’s optimism. 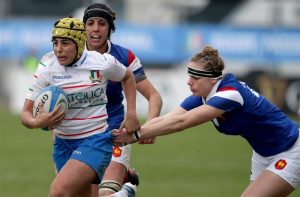 Their passing movements were starting to spell danger for the visitors; Diallo paid the price for slapping a pass down – yellow. On 53 minutes came what might prove the decisive score through Bettoni, at the heart of another forward drive. Yet another longish TMO intervention caused palpitations, but the try stood. One more penalty in front of the posts made it 21-5.

A final cross-kick of the season from Imart to Jason was successfully caught, but she was bundled to the ground by two defenders. Two phases later the ball was in her hands again and she was clear. 21-12

A long break to the line by Rigoni was met with gales of cheers. She disappeared under a mass of happy team-mates. But what had happened to the French defensive line? To call it a dog-leg is an insult to dogs; 26-12. Surely Italy were home and dry now.

When yet another ball was ripped from a French grasp, it swung across field for a fitting conclusion. The skipper Manuela Furlan, burst through to crash over and gain her side an invaluable bonus point.

Joy unbounded in a corner of north-eastern Italy.

This was proof that determined defence will win tight matches. Wales were hanging on for long periods, indeed the opening score fell to Beibhinn Parsons on the left wing. But the other No 11 on the field, Jess Kavanagh showed her importance to the Welsh set-up by scoring a splendid reply at top pace. 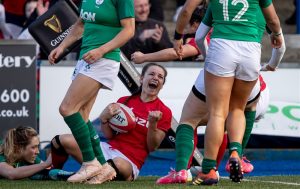 Things looked bleak when Siwan Lillicrap was yellow-carded for a high tackle, but the remaining 14 tackled their hearts out till the skipper, Carys Phillips, turned the game on its head with a try just before half-time.

It needed more defiant defence to keep out the marauding Irish on St. Patrick’s Day, but the game swung violently away from the visitors as first Bethan Lewis then Jasmine Joyce crossed for decisive tries in the closing minutes – that last one a Joyce special.

This result is as exhilarating for the Welsh as it is dispiriting for the guests. Both squads have been trying hard to unlock the secret of success this year. they have had good moments, but longer disturbing ones.

With this final result – not to mention the example of their menfolk at the Principality Stadium next door the day before – Rowland Phillips’ players can look towards sunnier uplands. This was only their fourth win over the Irish in twelve meetings.

These two results are than usually significant. The win in Parma gives Italy their highest finish ever. They are indeed the coming nation. They have the inbuilt advantage over their Celtic rivals of population size: as long as the game can go on attracting young talent, the national squad will benefit.

Already they are finding big powerful forwards to lead the charge. They were dominant for most of the game. Behind them, Di Giandomenico needs to find adequate replacements for his experienced back line, who can’t go on for ever. Barratin, Sillari, Stefan and the new captain, Furlan, have graced the azure shirt for many years. If Italy are to maintain this advance, youngsters need to be fed into the system. It would help enormously if they could find more fixtures to play. Last autumn’s tests were a novelty that must be repeated.

For Ireland, the picture is reversed. With the 24-5 loss to Wales, three distinguished former Irish players, Fiona Steed, Jenny Murphy and Lynn Cantwell are depressed and perplexed beyond measure. The last time they lost to them was in 2011. What has gone wrong? Two 6N championships in the 2010s, a semi-final in the 2014 World Cup, a 4th place in a World Series tournament – and now they lie 5th out of 6. They are the exceptions in not having the lower age-group structure that is vital in ensuring progress through development. 15s rugby is one of the few sports in Ireland capable of competing on the world stage, but as a non-Olympic sport fails to get government backing. The national set-up needs pulling together.

More specifically Fiona Steed pointed to management errors: a hooker who had never played there before in a 15s game picked against Wales; a complete absence of second-row back-up on the bench throughout the 6N.

With the precise qualification details for the next World Cup still imprecise, Ireland faces the possibility of having to fight for the last European place against Italy, Scotland and Spain

Yesterday came the news of Shade Munro’s resignation as head coach of Scotland. As we survey the Scots’ lack of success over many years, it might look as though he has failed in his objectives. But that would be a misplaced criticism. He has worked hard not only with his squad but also with the wider world of Scottish women’s rugby. He has helped to put in place initiatives that can only strengthen future performances.

Let’s hope the SRU can find a replacement of his quality to raise standards north of the border.